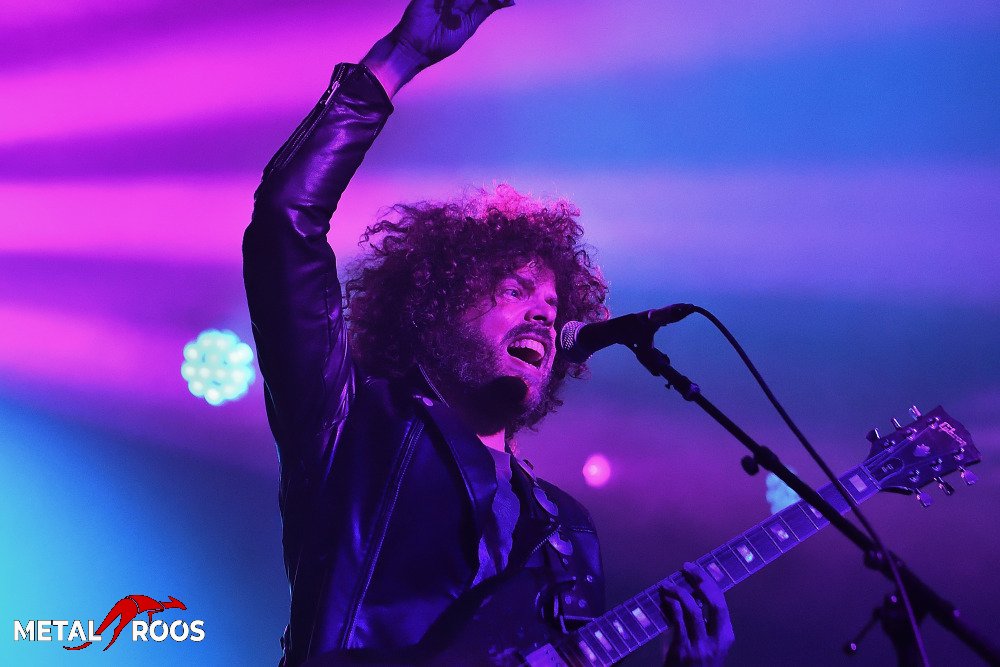 ‘Uncaged’ is the aptly named festival meant to herald the resurrection of the rock festival after so many false starts! An end to being cooped up on Saturday nights scouring YouTube for fan-filmed footage of gigs in Boise & Albuquerque! A release from staring out the window at yet more rain, listening to your worn out Kiss bootlegs, a Return of the Big Rock Show!!!  So indeed it’s fitting that the Hordern Pavilion is the only place to be on this spectacularly sunny Saturday afternoon.

Glasshawk crack things open in fine fashion with an agreeably thumping groove. ‘Save your breath’ & ‘new single ‘Robin the hood’ are stand outs as the lads from the Central Coast blast away any cobwebs still lingering from Friday night.

Inside the cavernous (and quite chilly) Hordern, the Black Cardinals amble onto the big stage. With their big, fat southern fried grooves, and the singer’s powerful vocal range, they’re a treat for those who ventured into the darkness early on.

Back outside, where the crowd is building steadily, Molly & The Krells thrash into life. Alongside their twin guitars, catchy melodies & choruses, there are plenty of classic rock elements thrown into the Pop-Punk mix, which add much more light & shade to Molly’s palate. Singer, Blake mentions just how long it’s taken this festival to actually land, there’s a definitely celebratory vibe to the set. With the sun shining down, there aren’t many better ways to spend a Saturday afternoon.

El Colosso, win best band name (and beard) of the day! They blast their way through their set, fast & heavy like a runaway garbage truck, belching black smoke with Motörhead & AC/DC screaming from the stereo, they dirty up the Hordern forecourt nicely.

With Dead City Ruins t-shirts spotted amongst the crowd early on, the band are enthusiastically welcomed to Sydney. Seasoned Road-dogs, these guys are clearly right at home on a big stage! Their huge classic hard rock sound, massive choruses & frenetic energy, they make themselves right at home on the Hordern stage. The Melbourne rockers are one of the highlights of the day! I’m certainly not the only one looking forward to seeing Dead City Ruins return to Sydney soon.

Frankie’s World Famous House Band crawl out of their basement pizzeria home, and bring the party outside to the Hordern forecourt. Their set is definitely a highlight of the day, (Although playing Black Sabbath Classics as well as they do, it’s a can’t-fail proposition) the party atmosphere amongst the crowd is in full flight. The polished sing-a-long Pop-Rock of End of Fashion goes down a treat for those who have ventured indoors out of the sun, although most are still enjoying the Sabbath party in the courtyard.

Next up is ‘I Built The Sky’, Rohan Stevenson’s guitar pyrotechnics bringing a change of pace for the afternoon session. The band are all fantastic players, although it feels like complex technical instrumental atmospherics fall a little bit flat with the crowd on a sunny autumn afternoon.  Perhaps indoors may have worked better for these guys.

“We’re 28 days from the past, so jump in the DeLorean & lets go…” The 90’s Rap Rock band take the crowd on a run through their (fairly extensive to be fair) catalogue of hits. The boys seem fairly gassed after a couple of songs though, so the constant ‘Old’ jokes that pepper the set ring fairly true. That said, the crowd that they bring in certainly enjoyed the trip down memory lane.

The venue is filling up nicely by late afternoon, so the Getaway plan’s intense quiet / loud dynamics play well, with ‘Shadows’ being a perfect ‘soundtrack for a setting sun. Tex Perkins & his Fat Rubber Band are Suited & Booted, delivering a tasty slide into a Swampy Bluesy stomp. They boogie through a gloriously loose Stones flavored set.

The perfect image to sum up The Hard-Ons was the contrast of Ray Ahn’s Blue 70’s football shorts, and new boy Tim Rogers’ Gold velvet flares. They flail into their patented righteous racket, bringing the energy levels right up to begin the evening session. The new songs blending well with the old classics. This is a collaboration that while at first seemed surprising, works really rather well.

There is a big crowd indoors awaiting Twelve Foot Ninja, who certainly don’t disappoint. The singer is so colourfully dressed, he looks like “the Macho Man” Randy Savage in a velour tracksuit! He glows so brightly under the black light, I’d wager that people are squinting as far away as Randwick. “Welcome to Fairstar the Fun ship” he declares, as the band set about careening between Hardcore and groovy dance via Bulldozer metal, with bits of hip hop & funfair organ music. They generate the first decent moshpit of the day.

If t-shirts in the crowd are any indication, Bodyjar are surely highly anticipated. Indeed they get one of the biggest welcomes of the festival. Clearly plenty are here just for them. Their up-tempo pop-punk and genial tomfoolery goes down a storm.

The first time I saw Shihad was at a Big Day Out in 1996, so to say that they’ve come a long was is probably putting it mildly. Tonight, they’re taking no prisoners! The stage is all shrouded in Shadows & silhouettes with relentless riffage of ‘Tear down those names’ shreds. Even the cover of Split Enz ‘I Got You’ has big sharp teeth.

You Am I come out all Red & Blue light & rock star shapes. Tim Rogers in particular is full of energy for his 2nd set of the day. The sound however is quite thin & tinny. Despite the string of hits being trotted out, the crowd is fairly subdued. Rogers apologizes for not having choruses with “Whoa Whoa Whoa” & “Yeah Yeah Yeah” having “Missed that day in school”. It sounds odd to say, but You Am I seemed a bit swallowed up by the big room.

We catch the end of Magic Dirt, who have no such issues! Awash with feedback the crowd are singing along plenty. Adalita visits the photo pit to commune with the faithful before finishing with ‘Dirty jeans’ & ‘I was cruel’.

Wolfmother come out to a Taylor Hawkins tune, which was a cool understated tribute. The stage is suddenly awash with light, with red searchlights scanning the room, it’s a really dramatic effect.  Opener ‘Dimension’ has a great riff & vocal melody combination, then Woman, is all psychedelic lights, looking like the inside of  lava lamp. The sound is immense, the vocals in particular, in fact the band, are in top-notch form. Andrew Stockdale announces that it’s been 15 years since Wolfmother played the Hordern before New Moon Rising. Newer tune ‘Rock Out’ finishes up like a 60’s hallucinogenic flashback nightmare.

A fitting finale to what was a monstrous return of the rock festival to Sydney.

Wolfmother, Magic Dirt, You Am I, Bodyjar

Melbourne prog metal rockers Twelve Foot Ninja have announced that vocalist Nik ‘Kin Etik’ Barker “has made the difficult decision” to leave the band. It’s been revealed that Barker will remain with the group for all […]

Silverback Touring is pleased to announce the new dates, venues and line up additions for the inaugural Uncaged Festival which will now take place in March and April 2022 due to the ongoing covid situation. […]