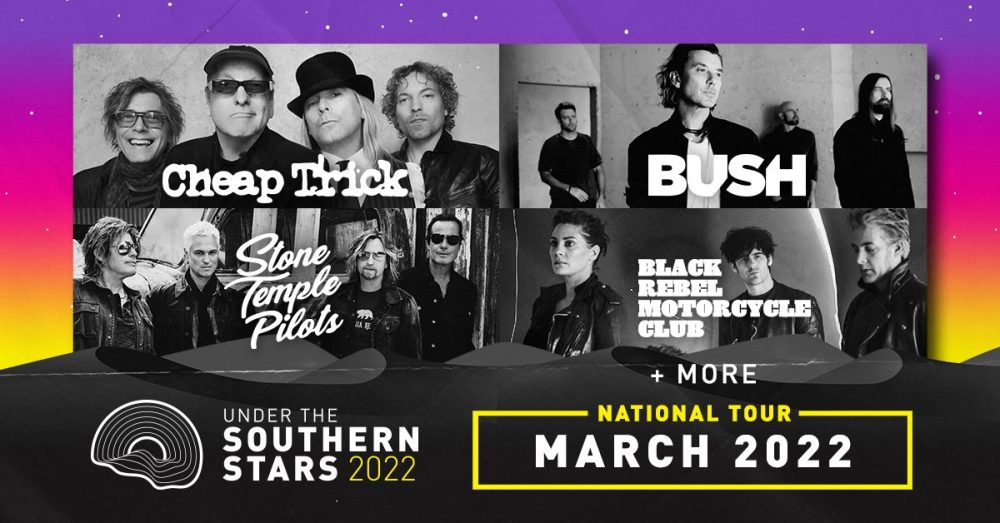 Walking toward the Entertainment Centre i could hear the rock pulsing from inside, really got me in the mood for a wicked night with legendary bands! Before getting into the review I want to quickly apologise for not knowing certain band members names! I missed them during the show and wasn’t sure who was who when I looked it up!

Electric Mary: Starting at 4.45 on a Tuesday would be rough for anyone, unfortunately I missed most of the set due to work but from what I saw they definitely impressed me and the slightly scarce crowd! Electric Mary brought great classic rock vibes with big guitar driven anthems, a great warm up for the night ahead. Closer, My Best Friend, had a sick drum solo break in the middle, very impressive! especially since the drummer lost count during the intro! Electric Mary had a true feel good vibes. A good giggle was had all round when the Vocalist knocked the bassists cord out of the amp, remarking that he “couldn’t find the hole”. With a finale of a wicked duel solo outro into a big rock finish, Electric Mary were really solid.

An ominous presence and a slow slurring start, while bathed in red light and cloaked in black. Black rebel Motorcycle Club have a dusty and psychedelic kind of sound, even though the mix was a little messy and the levels made it hard to pick out the more intricate melodies. They slowly gain momentum, bringing out big country vibes for with Hate The Taste with the only thing missing being a harmonica solo. However! They finally bring the harmonica out for their closer but it must have been difficult to play through a mask! Slide guitar completes their sound which definitely feels like a long journey on the road. Being honest they fell a bit flat for me, not much energy or crowd interaction and the mix didn’t help but still they had their fans in the audience who loved it.

As the floor begins to fill up tensions rise for the great Cheap Trick. With a huge triple guitar attack and a 12 string bass! When they kick into Dream Police handfuls of picks are thrown into the crowd dance pits open up ending with smiles and cheers all around. If You Want My Love is an everlasting classic and instantly recognisable. Cheap Trick have still got the chops to really rock the heck out of this place, getting the biggest reaction from the crowd so far! Culminating I’m a big sing-along and once again nothing but smiles, laughs and dancing all round.

A huge pop for another classic anthem in The Flame with Vocalist Robin Zander still hitting those big notes. The crowd absolutely loving it with more dancing up and down the aisles. I Want You To Want Me brings one of many massive light shows of the night, fitting for a massive band with a massive sound! Cheap Trick just keep pulling out the platinum hits as closer Surrender sounds huge even a staggering 55 years on. Another great reaction from the crowd sees the almighty Cheap Trick off, still heroes of the rock fan.

Shocking the crowd from their intermission stupor with big drums and spotlights Bush crash into their set. Bringing out the big guns early Machine Head had a tonne of energy which fed the crowd into a frenzy! New track Blood River sits really well in the set sounding just as strong as classic material. Bush were the first band to truly utilise the video backdrop with wicked effects and visuals enhance the impressive light show and in turn makes the Entertainment Centre stage feel so much bigger than it is. Bush were definitely the heaviest band at that point and Quicksand proves that point. Big riffs and rumbling bass, also the best sound of the night by that point with guitars clear and crisp.

Talking of how it’s a battle to get out here Bush described how grateful they are being here again before launching into “how everything started” the classic Everything Zen. While they’re only a 4 piece they guys in Bush cover the stage, giving the crowd plenty to look at and enjoy. Of course the classic Glycerine gets a huge pop from the crowd, with voices rising high, with the crowd taking vocal duties for the 2nd verse as voices echoed off the walls. Last song Comedown brought another huge sing-along with the crowd again taking vocal duties for the final chorus with Bush saying their goodbyes while asking everyone to check out the new release and judging by the strength of what I heard I will be.

The on-stage chemistry is electric when Stone Temple Pilots hit the stage if anyone had questions about how the recent line-up would go they were answered in spades tonight. A great roar of applause greet the headliners as they tear into their set. The charisma flowed from vocalist Jeff Gutt as he effortlessly commanded the stage belting out the classic STP tracks. I have to mention the lighting again, it was just immense and relentless, changing the mood and energy with every song!

A lovely instrumental intro brings in 4th song Down, with phones in the air and once again the audience are loving this set. One lucky fan walking away with the slide Dean DeLeo used during the solo…lucky! With a quick dedication to Scott Weiland STP cracking into the classic Plush getting a roar from the crowd and good vibes all round. For me, the moment of the night was hearing the monolithic Interstate Love Song, a true favourite of mine and anyone that likes guitar music.

Picking up the pace with Crackerman as a slithery Jeff Gutt worms his way around the stage using his powerful voice and charisma to get the crowd churning. Doing their best to wring every ounce of energy from the crowd STP slowly Bleed into a killer rendition of Trippin on a Hole in a Paper Heart.

With an instrumental intro bringing the funk before they slam into closer, another stone cold classic, Sex Type Thing a fitting song to close the night, a truly great rock song from a truly great rock band. The night was full of great performances and legendary music with everyone loving every second. But I must say one last thing. For some reason a random guy working backstage kept getting up in between each band for a moment in the spotlight to shout into a super live mic about the obvious of who was up next. It was as annoying as unnecessary. Stop it. 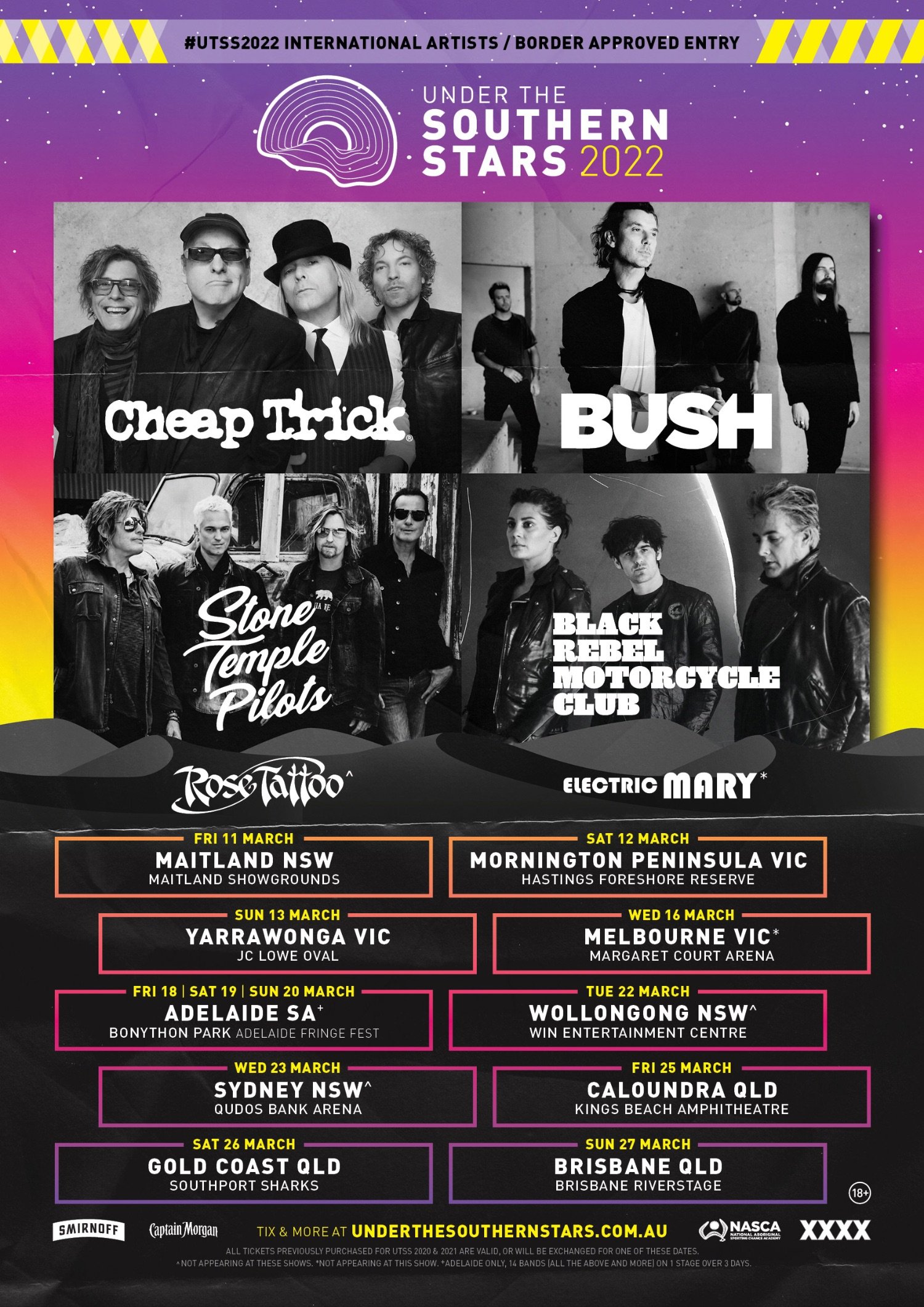