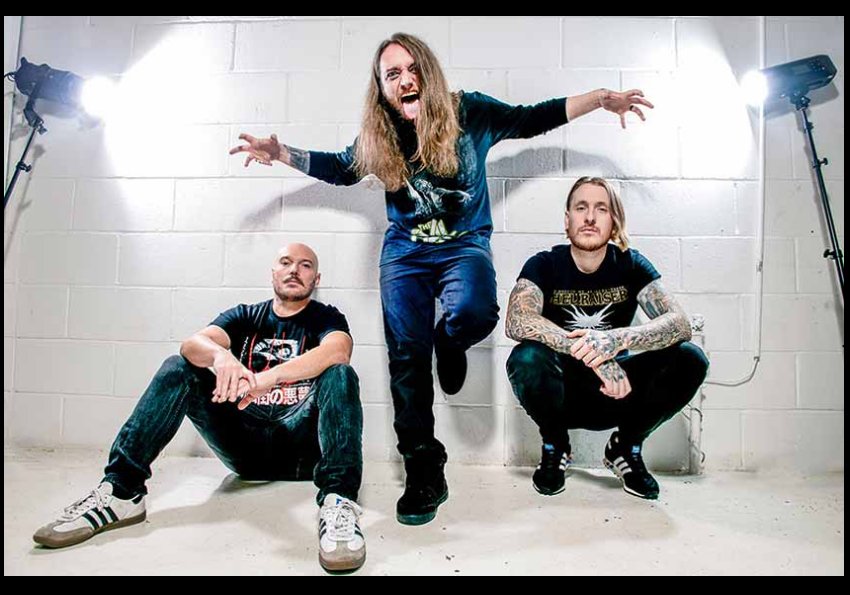 The kings of British death metal, INGESTED, are kicking of 2022 with the release of “Rebirth,” a taste from their upcoming album, slated for release this fall on Metal Blade Records. The track comes as the trio hit US shores this week supporting FIT FOR AN AUTOPSY through February.

“‘Rebirth’ has arrived at quite an important time for INGESTED. We’ve shed our skin and transformed into our next phase,” proclaims frontman Jason Evans. “We decided on a live video for the single as we’ve missed the bubbling intensity of playing live so much over the past year or so, we really wanted capture the destructive nature of an INGESTED show. Unchained, unleashed and unburdened, we’re ready to show the world what INGESTED is truly capable of, and to all our fans, thank you for sticking with us through the years, the best is yet to come!”

INGESTED formed in 2006 in Manchester, England and have since toured extensively with Cannibal Corpse, The Black Dahlia Murder, Nile, Carnifex, Revocation, and have been seen on European festival stages including Summer Breeze Open Air. The band earned Billboard chart entries in 2018 with their album “The Level Above Human,” including: #5 on Billboard’s Heatseekers chart,
#30 Independent Albums, #16 Hard Rock Albums, #135 Top 200. The band saw chart action again with their 2020 release “Where Only Gods May Tread” including #4 Current Hard Music Albums, #10 Top new Artist Albums, #139 Billboard Top Albums and #15 on the UK Rock & Metal Albums, and #50 UK Independent Albums chart. With an already extensive release and touring history, INGESTED are eagerly anticipating an exciting new era as part of the Metal Blade Records roster.

16 years into their career, with original members Sean Hynes, Jason Evans & Lyn Jeffs, INGESTED made the exciting move to sign a new long-term deal with Metal Blade Records in 2021. Evans adds, “Metal Blade Records is a legendary label, with a roster of legendary artists and we are very proud to say that INGESTED will now stand amongst them. We’re super excited about this next step in our journey and can’t wait to bring you more music, more videos and more shows, worldwide. Here comes the Metal Blade era of INGESTED!”