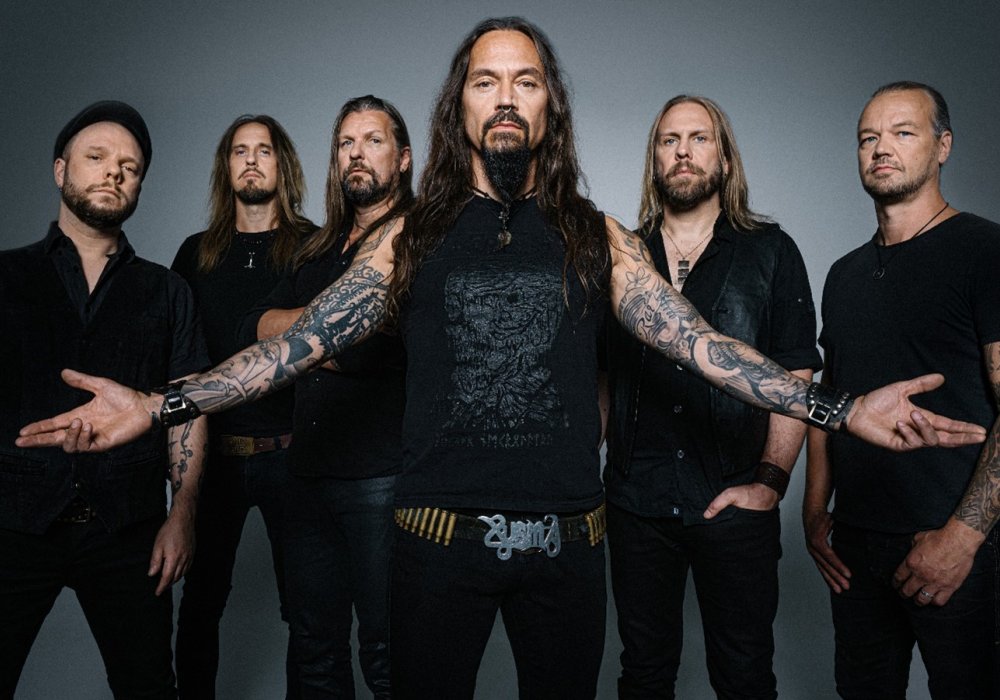 AMORPHIS – who stand among Northern Europe’s leading dark metal acts, hitting #1 on the Finnish charts five times – have been captivating fans and critics for over 30 years with their melancholic, yet heavy soundscapes. After announcing their upcoming fourteenth studio album, HALO out on February 11th, 2022 through Atomic Fire, last month, the waiting time is over as the sextet present the world with the record’s first single. View a music video for ‘The Moon‘, created by renowned director Patric Ullaeus (rEvolver Film), below.

Comments lyricist Pekka Kainulainen: “I have done several drawings and paintings on this subject over the years. Now I complementary wrote some heavy metal lyrics… This is a song of love.”

Guitarist Esa Holopainen adds: “It’s a very atmospheric and catchy song that represents what AMORPHIS sound like in 2021 well.”

Pre-order the album physically, pre-save it or pre-order it digitally to receive ‘The Moon’ instantly now, here: https://music.atomicfire-records.com/halo

Rock and metal music have always been a haven for those who have bigger stories to tell, who have grander emotions to convey. For more than thirty years, Finnish figureheads AMORPHIS have done their best to carve their very own niche in heartfelt yet aggressive, melancholic yet soothing tunes. On HALO. their staggering fourteenth studio effort, the Finns underline their trailblazing status as one of the most original, culturally relevant and rewarding acts ever to emerge from the land of the thousand lakes.

In the past, mythology and legend took the role of today’s pop culture: stories and a set of values uniting us by giving us a voice and a tapestry on which we can find each other and identify with something. By weaving the tales of Finnish national epos Kalevala into their songs and interpreting them in a timeless way, AMORPHIS combine the role of ancient minstrels and luminaries of the modern world, honouring tradition without getting stuck in the past.

The vibrant, lively, and touching beauty that is HALO highlights their musical and storytelling mastership on a once again soaring level: it’s a progressive, melodic, and quintessentially melancholic heavy metal masterwork plucked from the fickle void of inspiration by original guitarists Esa Holopainen and Tomi Koivusaari, bassist Olli-Pekka Laine, drummer Jan Rechberger, longtime keyboardist Santeri Kallio and vocalist Tomi Joutsen, the band’s long-standing lyrical consciousness Pekka Kainulainen and a selected group of world class audio professionals led by renowned Swedish producer Jens Bogren. Considering the band’s prolonged journey in the forefront of innovative metal music, it’s difficult to grasp how AMORPHIS manage to raise the proverbial bar time and time again, presenting a more than worthy finale to the trilogy begun with 2015’s Under The Red Cloud followed by 2018’s Queen Of Time.

Halo, the new chef d’oeuvre from Finland’s melancholic progressive metallers, AMORPHIS, will be released via Atomic Fire on February 11th. In advance of the record’s official unveiling, today the band reveals a new single accompanied […]

AMORPHIS will tour North America with their brand new album Halo this Spring! The tour begins on April 13th in New York City and will make its way through nearly two dozen cities, coming to […]

For more than thirty years, Finnish figureheads AMORPHIS have done their best to carve their very own niche in heartfelt yet aggressive, melancholic yet soothing tunes. On HALO, their staggering fourteenth studio effort, the Finns […]