Western Massachusetts Melodic Deathcore Band, An Unction In Braille unleash the second single, An Inch From Death off their Debut EP, The Wordless Whisper which suffered a full year of waiting through a pandemic to be revealed. The EP is strongly influenced by Death and Loss and will be released on October 29, 2021.

The band delivers fast-paced segments that cut right into slow and crushing breakdowns. ‘Soaked in Blood, Crush My Pride’ messages of hopelessness. From swift tapping to strong breakdowns, this track will have you at the edge of the knife.

“As one of our first AND favorite songs written, we wanted to create something we believed in. After all, we live An iNch From Death”. says Vocalist Josh about the single. 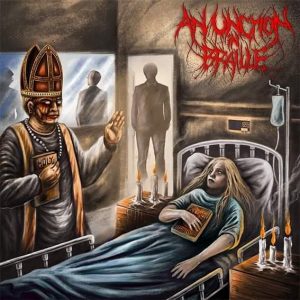