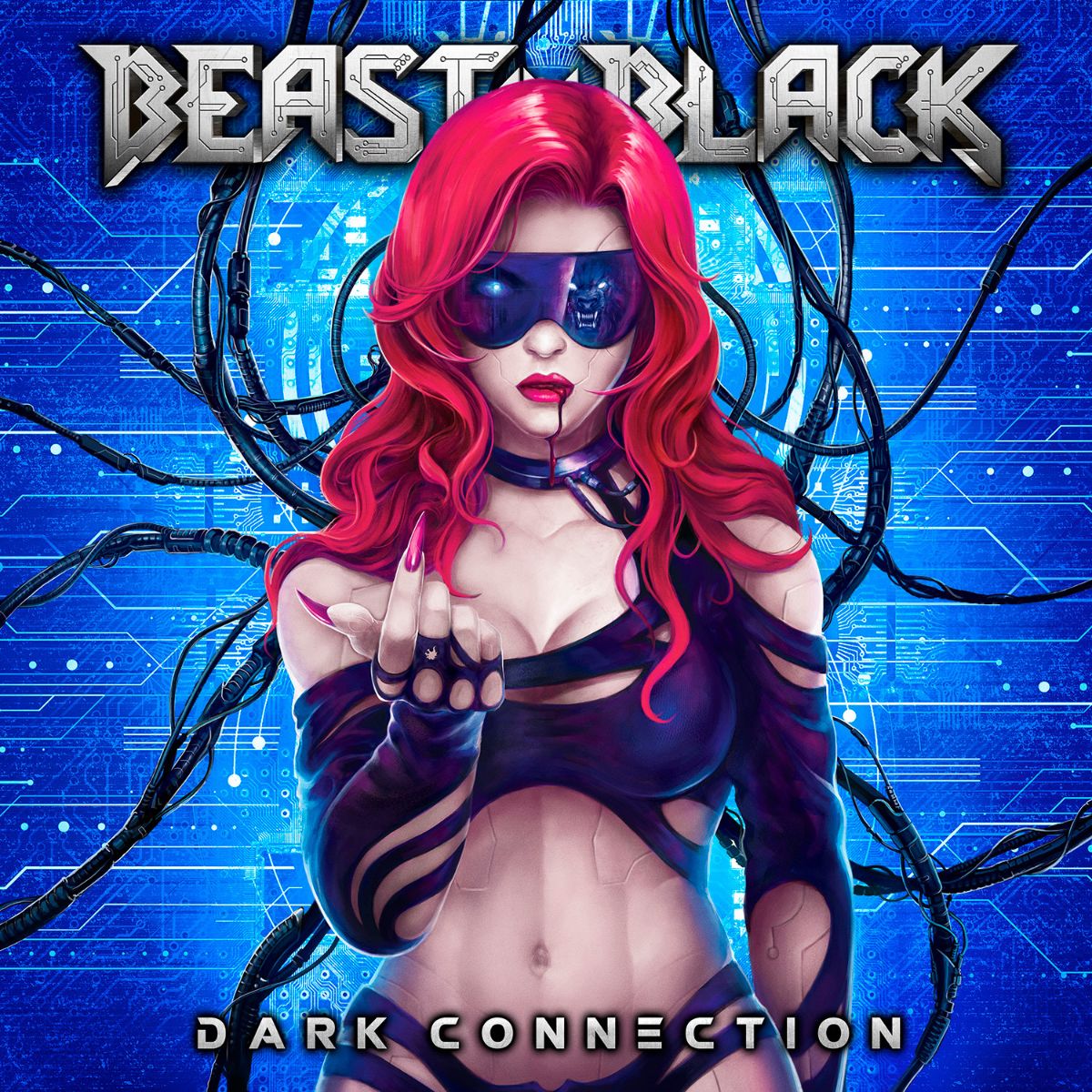 Beast In Black is a heavy metal band from Finland formed in 2015, releasing their debut album ‘Berserker’ in 2017 and their sophomore album ‘From Hell With Love’ in 2019. The band has toured with the likes of Rhapsody Of Fire and Nightwish, and in 2021, ‘Dark Connection’ – the band’s third album, was released.

Beast In Black has exploded onto the metal scene with their energetic blend of traditional come power metal. The Finnish outfit has risen quickly – releasing three albums in a little under four years! ‘Dark Connection’ is a weighty twelve-song offering spanning almost an hour in length, storming into life with the bombastic opener ‘Blade Runner’. Fast-paced and full of fire and brimstone, ‘Blade Runner’ is a scorcher, blazing a trail of fire as it hurtles across the land. And the gritty, aggressive nature of singer Yannis Papadopoulos’s vocals are as emphatic as ever! ‘Bella Donna’ drops a gear, yet maintains the album’s storming start as far as oomph, urgency, and purpose are concerned. The dramatic and infectious nature of the band’s previous two albums is present here too – maybe more than before. There’s just something about the Beast In Black sound that turns heads and makes listeners sit up and take notice.

Adopting the heavy-hitting, foot-stomping style of metal, ‘Highway To Mars’ is a melodic monster, swaggering forth like it owns the place – and for the moment it does, as Beast In Black continues to batter ears with an unrelenting intensity. An infectious intensity that is just superb. With an upsurge in the battering, ‘Hardcore’ is a savage barrage of hard-hitting heavy metal to headbang to – very hard! The heaviest song so far, ‘Hardcore’ features the most glorious sing a long-able chorus – you’ll be singing along in next to no time, and chanting “hardcore” like your lives depend on it. With even more oomph and oof, ‘One Night In Tokyo’ bludgeons the senses with no mercy! The band delivers the kinda punches heavyweight boxing champions use to destroy their opponents. The first single off the album ‘Moonlight Rendezvous’, returns the mid-tempo swagger of earlier. Maintaining the album’s highly melodic nature, ‘Moonlight Rendezvous’ gives the listener a slight breather from the relentless barrage of bombast that Beast In Black has dished out across the album’s first half.

And with an emphatic upsurge in pace and aggression, ‘Revengeance Machine’ is a rampant firestorm of furious heavy metal – the aggressive nature bordering on the levels you’d expect from a thrash metal band! The pace of ‘Revengeance Machine’ is phenomenal, the headbang ability furious, and Beast In Black deliver one of the album’s major highlights. Restoring the more “usual” pace we’ve come to expect from the band, ‘Dark New World’ is yet another hard-hitting power, come heavy metal combination – all the while maintaining the album’s overall melodious intent. ‘Dark Connection’ is a powerful album loaded with hooks, lines, and melodies to keep you highly entertained from start to finish. The crushing crescendo of metal moves swiftly on – and I’m telling ya there’s hardly time to take a breath – with ‘To The Last Drop Of Blood’. With its thunderous gallop of traditional “foot on the monitor” inspired heavy metal, ‘To The Last Drop Of Blood’ is a screamer to please.

Bustling heavy metal takes a front seat with ‘Broken Survivors’ – still maintaining the album’s melodious intent and highly infectious nature. ‘Dark Connection’ is an addictive album, and one that you won’t skip a single song. For each and every song are gems, and you’ll want to experience every second of them. Entering ballad territory, ‘My Dystopia’ doesn’t stay there very long – meandering through the ballad, hymn, and anthemic styles of metal. A swaggering monolith of mid-tempo stomp, ‘My Dystopia’ finally allows a break from the breathless pace of the album. And to the albums final song, a cover of ‘Battle Hymn’ by Manowar, from the bands 1982 debut album ‘Battle Hymns’. And what a glorious cover it is – keeping to the pace of the original, and maintaining the originals epic and tension-filled atmosphere.

Overall, a glorious and breathless gallop of high energy and emphatic heavy metal, ‘Dark Connection’ is a bombastic blast of fire and brimstone.