1982 in Essen, Germany when friends Millie Petrozza and Jürgen "Ventor" Reil decided to put a band together who would have known that 31 years later that band originally called Tormentor would be 13 studio and many live albums into a career where they have influenced most of the best known metal bands in the world with their European aggressive thrash stylings.

This brilliant live album "Dying Alive" which was recorded in Oberhausen, Germany after playing 45 dates on their European tour concluding with this giant set played in front of their adoring country men. It features 24 tracks from the Kreator discography from the beginning of Endless Pain release in 1985 right through to last years Phantom Antichrist album, and everything in between so fans of this band won’t have any dramas finding their pleasures. Germany has a powerful history in Metal and with Kreator’s consistency with new material seemingly endless they’ve been waving the German flag for others to follow, making a German crowd very educated when it comes to their music.

As a live band there’s no question of Kreator’s ability, after so many years of touring and studio work there performance on this release is second to none, and Millie’s ability to get the huge crowd involved, calling for circle pits and the audience obeys him like some freaky cult leader, singing to each track, and chanting "Kreator, Kreator" after every song proves their standing within the world Thrash scene has never been tarnished after even after so many years wrecking us with their audio attacks.

This Album/DVD was produced using 24 cameras, guitar cams and even a moshpit cam so it makes you feel like your sweating in the pit with the rest of the lunatics. The running time is around 90 minutes and the production values are great so the sound is top notch giving us a real feel of the atmosphere at this show, and Nuclear Blasts product delivery with box set style is also a feature of this release.

Overall, Kreator’s legendary status is further more cemented with this "Dying Alive" album, just proving after 31 years they are still upon the top of the mangled wreckage of the metal mountain and are kicking ass as they always have for many many years, and the scary thing is there’s no signs of slowing down for Millie and his crew as they destroy us with every release. This is a must have for all Kreator fans old and new as they tear us apart with their live performance playing songs from their back catalogue that will keep all Thrashers happy for the full 90 minutes of pure metal bliss. 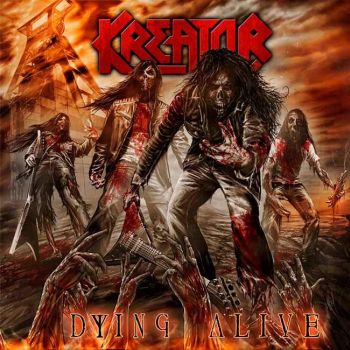