The project contains a collection of five tracks which act as a follow-up to the band’s latest album Chemical Warfare, released in April. The original LP received praise from critics upon release, with Kerrang! writing, “Sin City supremos Escape The Fate lean further into pop, with surprisingly fun results.” The band continues to experiment with their sound on this EP, with frontman Craig Mabbit describing “Around The Sun (Feat. Brandon Saller of Atreyu)” as a “rock n roll anthem that rings in the new year,” and “Over It” as a sequel to “Let It Go” from their album This War Is Ours. A limited-edition vinyl of the EP was first made available on Record Store Day’s RSD Drops event this past June. See below for full tracklisting.

Chemical Warfare: B-Sides is available to stream or download across platforms etf.ffm.to/chemicalwarfarebsides

Last October, the band teamed up with Lindsey Stirling on “Invincible,” an energetic, sonic ride about resilience that is set to appear in the soundtrack for the upcoming Better Noise Films horror-thriller THE RETALIATORS. The track was received positively, as Pure Magazine called it, “A spectacularly vigorous and exceedingly touching alt-rock song…that packs an incredibly powerful punch.” An acoustic version also appears on this EP.

Recently premiering at Arrow Video FrightFest 2021, THE RETALIATORS received critical acclaim, with The Hollywood News writing, “‘The Retaliators’ is a rock song birthed onto screen and is sure to be a hit with fans of music and horror alike.” In their review, Film Combat Syndicate called the film “a pliable, introspective macabre revenge thriller – one that dares you to look yourself in the mirror and accept who you are.” The soundtrack’s epic line-up includes music from Mötley Crüe, Five Finger Death Punch, Papa Roach, Bad Wolves, Cory Marks, The HU, and more. Mabbitt also makes an onscreen appearance during the film. 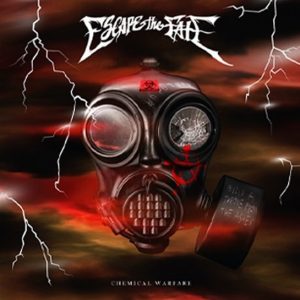 CHEMICAL WARFARE Track Listing:
1. Around The Sun (Feat. Brandon Saller of Atreyu)
2. Shut up And Listen
3. Over It
4. Invincible (feat. Lindsey Stirling) – Acoustic
5. Not My Problem – Acoustic