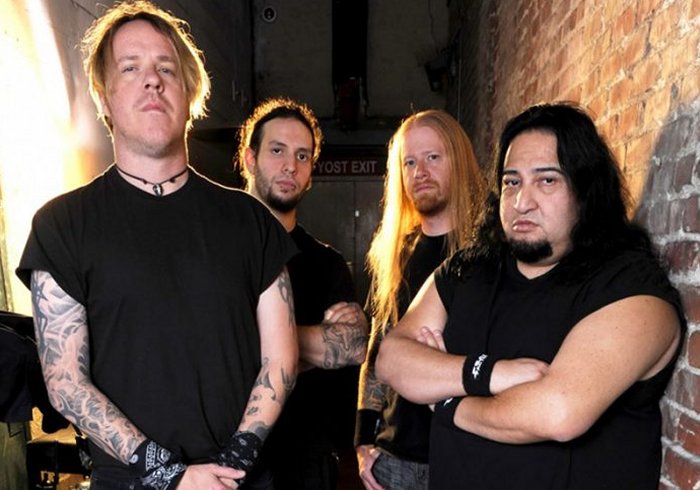 Fear Factory are currently working on a new album but in the meantime, the band are heading to Australia in early 2015 for Soundwave Festival. We talk to guitarist Dino Cazares about the new recordings, the Australia tour and more.

Metal-Roos: G’day Dino. This is Adrian calling on behalf of Metal-Roos, in Australia.

Cool, how are you? What part of Australia are you calling from?

Ahhh, Adelaide I love that place. Been there many times…

Metal-Roos: How is the new album progressing?

The album is going great. So far we are in pre-production – almost done with that. Hopefully next month we will be officially in the studio recording.

Metal-Roos: So do you have a title worked out or is it too early for that?

Yeah, your gonna have to wait for that. We are still bouncing around ideas about the name and concept… that kinda thing. But what we have got so far and that is pretty amazing.

Metal-Roos: So would the Edge Crusher concept make an appearance on the new recording?

Ahh, that’s a very good question… we do have a character similar to him but I don’t want to give it away, you know… I will leave that all up to Burt… until the timings right and we have finished writing the whole concept thing. But I do want to say that we will have the Edge Crusher part 2…

Metal-Roos: Awesome, I think fans will love that!

Metal-Roos: Speaking of Burton, does the band have to write with his unique vocal style in mind or does it come naturally?

Well, Burt goes with what feels right for him – if a part sounds melodic he will sing melodic and if it’s heavy and aggressive or somewhere in between. He kinda likes to feel the part out. When I write the stuff he can feel where I’m going with it, so for him it like a natural process… ok, this should be melodic, and this part aggressive… I like to leave it up to him and for the most part he’s pretty spot on.

Metal-Roos: So the band is returning to our shores for Soundwave. Is the band looking forward to that?

Yeah, we were in Australia something like a year ago for the Demanufacture tour but we are really looking forward to do Soundwave. It’s our first time on the festival and we are very thankful that AJ is hiring us to come play. We are extremely excited and Fear Factory feels like Australia is one of our homes away from home. We can’t wait to get down there.

Metal-Roos: Will any of the new songs from the upcoming album make it to the Soundwave set list?

There is will a big possibility,yeah. But I don’t want to say much at this point.

Metal-Roos: Is there any particular part of Australia you like the most?

Not really, I love the whole country and I like New Zealand as well. I can’t really say if I prefer one city over another and we do have friends all over the place – from Brisbane down to the Gold Coast, Sydney, Melbourne, Adelaide and Perth. So it’s always a pleasure heading down there and seeing my friends. There’s nothing bad that I can say about Australia…

… oh, one thing that’s bad is that it’s more expensive than America…

Metal-Roos: Hell yeah, I agree with your there, Dino!

.. .so when you guys come to the States it’s extremely cheap!

Metal-Roos: With the Industrialist album, why did you go with a drum machine instead of a real drummer?

During that album we were really under time pressure and we didn’t have time to hire a drummer. Things didn’t really pan out the way we hoped and so we ended up using a drum machine. Under the restraint of time that was the quickest method so that’s what we chose to do…

… but we were very honest and told people that’s what we did. Some people liked it, some didn’t. We received some backlash from that but it is what it is… you know, you learn and with every album we make, we learn more.

Metal-Roos: When Fear Factory first released an album, the band were considered a death metal band. Did you think this was a fair label?

I think it was a bit harsh as I would never consider us having death metal lyrics but we definitely had our own thing going on. I think it was Burt’s tone – the tone he had going on – he had the death metal growl but lyrically not. We were trying to discover ourselves. We were big fans of bands like Godflesh and Napalm Death but fans of industrial music like Ministry and Nine Inch Nails, that kinda thing. We took some element of each and put it all together in a big melting pot; when you hear the song Scapegoat, I don’t hear some death metal song… even Martyr. Obviously we didn’t find ourselves until Demanufacture. On that album we found who we wanted to be, tone-wise. The concepts and ideas, we got better in writing songs and it was just a well crafted album. From there we took it to Obsolete and to a whole other level. It was almost a mature record for us – there are some groovy tracks on that record. You could say that all the records released up to that point, well… Soul, Demanufacture, Obsolete and Digimortal… are all four different records; they all sound like Fear Factory, they have our signature sound and some songs are longer, shorter, heavier, some are groovier. But one thing I can say that it’s all original.

Metal-Roos: Doing a little research for my interview I discovered that you now have ex-Chimaira member Matt Devries playing with you. How does he fit in the band?

We have known Matt for years now and Chimaira have toured with us over the years. We were looking for a bass player… well, we weren’t even looking bass player but when ours left, we were thinking who we can we and I said, I know who, and I called him. That was pretty much it and he was in the band.

Metal-Roos: One question I have always wanted to ask Fear Factory: On your DVD release Digital Connectivity, there was a news report from Channel Ten showing footage of fans destroying the venue after the announcement that the band would not be playing. How did you react when you heard the news about that incident?

Hell yeah, for us it was a complete surprise. When we saw what was going on, I was like Holy Shit! I have never caused a riot before – or anyone to riot – and I was in a bit of disbelief but then I realised how passionate people were about seeing the band … it was unfortunate that Burt had lost his voice and people heard the news late. When they got to the venue and then they found out that’s when hell broke loose and they trashed the place. We felt their anger and frustration but something we would never condone… we apologised and I still apologise to this day. Shortly after we did another tour and we were thankful that no one got hurt… that was that main thing!

Metal-Roos: When you left Fear Factory a few years back, it was reported in the media that it got pretty ugly with things being said back and forth. Would you consider these reports accurate?

Well, some people in the media like to take things out of proportion and some others took it out of context just to make a headline. They take the most negative thing and write about. You know that was so long ago… what’s that?… almost 13 years ago… it really doesn’t matter anymore.

Metal-Roos: Does the band have much input regarding the look and production of your video clips?

Of course! We sit down and talk about the video and the concepts of it. A lot of machines are hand drawn and mapped out. We sit down and discuss it all, we look at the different angle it will be shot at – even Burt and I have a lot of say. It’s fun but there’s a lot that goes into it.

Metal-Roos: In the song Archetype…

Metal-Roos: About the lyrics… the infection has been removed the soul of this machine has been improved… is this about you?

Do you want my opinion?

Metal-Roos: … yes please, I would love your opinion!

My opinion is that I say it is about me. Burt says it’s not about me but he could just be saying that so he wouldn’t piss me off… [laughs] I think it’s about me but even when I wasn’t in the band they were still singing about me. You would have to ask Burt that question – come on Burt tell us the truth.

Metal-Roos: So all is good now in the Fear Factory camp – water under the bridge, as they say? It has been good over a decade now?

Yeah, but it’s like a family man – sometimes you get into arguments, sometimes people do things that are forgivable and sometimes not. It was nothing for me and Burt not to be friends anymore over… it was a stupid thing back then… but luckily we were able to make amends fairly quickly. We’re like an old married couple now. It’s cool as long as you go to counselling now and then…

Metal-Roos: For a lot of people Demanufacture was their first introduction to the band. In your opinion does it still stand the test of time?

Oh yeah, it was one of those records when it was all going right; the vocals were right, the release timing was right – everything was just spot on. We discovered who we were, discovered our direction, and for us it was nearly perfect. I would like to say Obsolete surpassed Demanufacture but a lot of our fan say it’s their favourite and for a lot of them like, you said, was their first introduction to the band. You know, the band was making some noise in the metal scene but some were still unsure [in an Aussie accent] “Hey mate, have you heard this band Fear Factory? Nah mate, I haven’t. Well you gotta check out this bloody ripper album Demanufacture, you have to go get it”. We sold a whole bunch of records and it definitely opened new doors. We went on tour for almost two years and didn’t see a whole lot of home.

Metal-Roos: Obvious question but do you miss home while out on tour or does the buzz of playing fix all of that?

You definitely miss the normal things of being home, your dog, your wife those kind of things… oh, not in that particular kind of order though! You miss the small things like walking down to your local bar… but for you it would be the bottle shop…

… you miss your community, your friends, this kids playing on the street. At the same time I’m excited to get out there and talk to all of the fans – so it works both ways.

Metal-Roos: What kind of sound do you have with your guitars these days, anything new?

I still use both 7 and 8 strings guitars and I have just released a signature series guitar. It’s called a DCM100 and is available now if you go to my site… DinoCazares.com… you will see them. I also have a signature guitar pickup called “The Retribution”. It’s an active pickup – fits all sizes and types of guitars. I’m very active in that way and very excited for everyone being able to purchase the stuff.

Metal-Roos: I would like to extend a huge thank you to Dino for speaking so open and honest to me and wish Fear Factory the very best when they head to Australia for Soundwave!