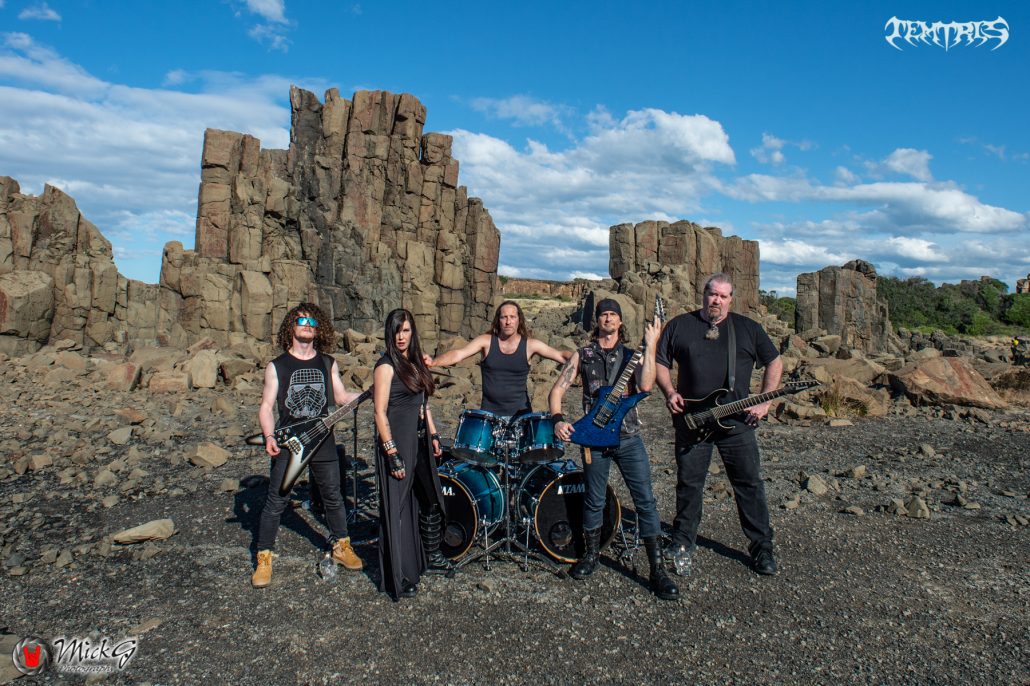 Temtris are a five piece act from the south of Sydney, Australia. They formed in 2000 and have released their albums Threshold (2003), Masquerade (2007), Shallow Grave (2014) and Enter The Asylum (2016). They have played shows all over Australia and supported Accept (GER) in 2014. Besides their current Australia tour, they are also planning to tour overseas in the near future. Their fifth studio album Rapture was released earlier this month, we caught up with singer Genevieve Rodda to discuss the tour and more.

Metal-Roos: Thank you guys for allowing me to have this nice talk with you. I want to start with your early days. What was the idea of forming a metal band, and sticking to this genre, can tell us more about that?

Genevieve: We have all been into metal from a young age so forming a metal band was easy step for us as muscians. We wanted to do something with my clean vocals and death backing vocals. Temtris has always had two guitarists. One on 6 string and one on the 7 string guitar to give our music more depth. There was not many female singers in metal in Australia when we started the band and we thought it would be great to be doing something a little different from all the thrash metal that was around at the time.

Metal-Roos: While I was checking out your online info, I found that you are touring Australia to promote your release. Is there any sign of progress you feel from audience feedback?

Genevieve: We have received an amazing response from fans regarding our new album. They are saying it’s our best release to date which is fantastic news. Temtris also has had some amazing reviews from around the world even the UK giving us a ten out of ten.

So far the new songs are coming across great when we play them live too and that is a good feeling when people can hear them for the first time and really get into the music straight away.

Metal-Roos: As a metal band, do you think that the metal scene in Australia is needing more promotion, more spotlight on it?

Genevieve: It can be tough getting noticed overseas when you are from Australia. There are a lot of great bands here but to get overseas onto the touring scene is very difficult. Takes a lot of promotion and hard work by the bands for many years to reach a large audience. Releasing albums with distribution and advertising overseas definitely helps with getting noticed to a larger audience.

Metal-Roos: Currently, what are the main hardships you face?

Genevieve: Probably the costs of touring. Australia is huge and to play even most of the states is a massive effort. We recently played the Gold Coast and Brisbane . This trip was 14 hours of driving just to make it to our show. We would love to bring our tour worldwide but without the support of a major label it is just not possible sadly. I think that is the way it is for most bands though. We would all like to play more if we could.

Metal-Roos: I want to move to your latest album Rapture. What are its main themes?

Genevieve: Each song on Rapture is about emotions and feelings we face in life. It is about overcoming the things that bring you down and making the best out of every situation and trying to move forward. Temtris really wanted to do a positive album as there is a lot of doomsday type albums being released at the moment and we wanted to do something fresh.

Metal-Roos: How did the process of writing your latest album go?

Genevieve: We started writing after the last tour for the 4th album Enter the Asylum. Once we had a theme and idea of direction to head with the music things came together fairly well. We did have some band member changes in the writing process so that ment some songs had to be re written to suit the new members styles and add in their creative ideas into the songs. Once we had the basic structure down we started demo recording ideas and it grew from there.

Metal-Roos: Are you planning to hit Europe or North America soon?

Genevieve: I would love to say yes but nothing is locked in at the moment but that is not to say we are not looking into it. Temtris has been applying for a few festivals so fingers crossed we can jump onto some shows soon.

Metal-Roos: Since the band started, what are your main influences?

Genevieve: Bruce Dickinson, Jeff Tate, Rob Halford and Eric AK and Doro Pesch. I love a lot of styles of metal from the softer stuff right through to some black metal also.

Metal-Roos: As you are a female-fronted band, how do you see the position of the female Metal musicians in Australia?

Genevieve: Female metal musicians are still pretty rare here. There are not a lot of us in the Metal scene. When I first started there were even less. I think you have to work pretty damn hard to get respect in the scene as a female. I think women are less likely to work in the metal music industry but I love what I do and wouldn’t change it.

Genevieve: Thank you, but I would not regard us as one of the most successful names in the Australian scene. Many bands are achieving great things here. Thrash is a very popular style with the metal bands and is the most common type of genre in Australia. We are sadly losing a lot of smaller music venues that local bands play in due to development in the cities. But we still have places like The Stag in Sydney which has now become The Crowbar which is in Brisbane as well. Here in Sydney, we have a fantastic very well known metal shop called Utopia which stocks an amazing range of metal merchandise and music.

Metal-Roos: Finally, thank you guys for giving me this opportunity, and good luck for your tour!

Genevieve: Thanks for the great interview and nice chatting with you.

Temtris are a five piece act from the south of Sydney, Australia.They have just released their third album “Shallow Grave” so we chatted to singer Genevieve Rodda about the new album.   Metal-Roos: How long […]

Temtris hit the Basement in Canberra on a bloody cold Canberra night.  The temp was already about 7 degrees Celsius when I got to the Basement.  But it wasn’t cold inside.  This was the first […]