Doomed heavy metal outfit KHEMMIS will make their long-awaited return this fall with the release of their fourth full-length album, “Deceiver.” Set to be released on November 19th from Nuclear Blast, their first record in over three years is their darkest release to date. Today, the band has revealed a music video for the first single, “Living Pyre.” Watch now at the link below.

“Living Pyre” signifies far more than just the beginning of another musical endeavor for the band; it is a substantial benchmark for emotional struggle and growth.

“When it comes to my own mental health, when I’m in a bad place, I can’t access the part of me that creates art. After reaching that understanding of myself, the bulk of this song came out in one sitting. I was feeling stable. I was feeling hopeful–even though so much outside in the world was not exactly inspiring. All of us needed a reason to feel a glimmer of hope.”

“Thematically, all of the songs are about the many ways that we are tricked into believing these stories about ourselves–that we are broken, that we are not good enough, that our genetics determine our fate. This title is the label that we put on our minds as a force that tricks us into believing these stories. The record’s lyrical trajectory is similar to Dante’s descent into an Inferno of his own making. It is our darkest album to date.”

“While our minds and hearts are responsible for this kind of deception, so too is the world around us. There is this dialectic between the two that produces suffering. Anyone who has struggled with mental health or suffered any sort of trauma will tell you that there were times that the mind is its own beast that has to be wrangled. In that sense, we become the deceivers ourselves; we believe we deserve to be the vessel for this pain and this suffering that is being inflicted on us both externally and internally.” 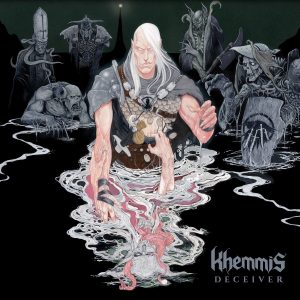