Australian extreme heavy metal act MINUS LIFE unleashes the music video ORDER DISORDER, from their forthcoming album CONTORTED REALITY which will be released on 1 October 2021. This is a dark metal journey blending a mixture of melodic / thrash / death / prog metal influences with an accompaniment of orchestral sound being referred to as a cinematic element, MINUS LIFE delivers on their first full production film experience.

ORDER DISORDER lyrically is about the fall of mankind, earth, the control of governments over its citizens. The greed of this system, trade deals, money, and power, comes across as a priority before the sustainability of our earth and humanity itself.

ORDER DISORDER pummels the listener’s ear with tight, hypnotic, polyrhythmic riffage only to then take the audience on a technical musical interlude featuring soaring vocal melodies and an emotive guitar solo. This moment of reprieve is shattered immediately as the song shifts into the crushingly heavy outro, which is sure to get heads banging and cement this song as a permanent staple in the band’s live repertoire.

TRAVIS HENDERSON (Drums/ Orchestral) on ORDER DISORDER – “To me, this is the beginning of the new MINUS LIFE sound. Order Disorder was the first song to be written with the orchestral element in mind. It means a lot to me and is one of my favorites. The contrast between brutal and melodic on this track is a real highlight for me personally”.

The Video was premiered yesterday by Australia’s Heavy Magazine.

Pre-order is available at Minus Life‘s Bandcamp page: https://minuslife.bandcamp.com/album/contorted-reality-2 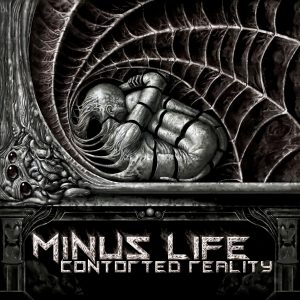 Get your copy of the album here: https://minuslife.bandcamp.com/album/contorted-reality-2