Energetic and packed full to the brim with lively riffs and up tempo songs, but nothing to write home about in terms of pure originality.

Columbian five-piece Iron Command bring to the table with their first full-length album a very obvious 80’s "Classic" vibe of metal. This classic vibe comes out predominately through the riffing throughout the length of the album. Guitar duo Carolina and Jonathan clearly take great inspiration from bands such as Judas Priest, Metallica and many New Wave Of British Heavy Metal Bands as a large portion of their riffs and phrasing techniques would be right at home in that era amongst these bands. Examples of these energetic riffs which I greatly enjoyed come up in the track "Iron Command" which kicks off the album in a very high octane manner, as well as "Power Abuse" which would no doubt be an incredibly dynamic live song. The lead guitar work is fairly entertaining to listen too. I enjoyed the tone of the solos, and thought it worked well with the rest of the sound of the album. I would have liked a little bit more variety in ideas for the lead work on the album as a whole though as it seemed many of the guitar solos had the same feel and phrasing about them.

As the album carries on, however, a sense of routine slowly sets in. All the songs are of very similar lengths, between three and a half to four minutes and have reasonably similar structures. I was left at the completion of the album thinking that "Iron Command" have got a pretty good thing going, but there is really nothing on this CD which hasn’t been done before. The riffs and songs began to blend in with each other to a small extent and there was limited contrast between each song.

"Iron Command" have got an obviously talented vocalist in Paola, and at times she shines. She lays out a few strong performances, such as those in "Persecution", "Power Abuse" and the album’s closer "Play It Loud". At other stages, however, I felt the vocal melodies did not complement her voice and the songs suffered heavily as a result. Take the album’s second song for example, "Years of Decay".

We’ve just come of the album opener where I can just picture myself screaming "IRON COMMAND" along with a rowdy audience. The chorus of "Years of Decay" feels empty in comparison, almost like it’s just another verse. I also felt a letdown in vocal melodies in songs "Rush Slaves" and "Into The Fire". For a band with such classic metal influences, there are few vocal parts that really stuck out to me throughout the album.

The drumming on the album wasn’t anything out of the ordinary, a solid performance. The highlight on the kit was definitely "Sentence". There was some ferocity on this song which I did not even know I had been missing from the previous songs. I feel the mixing of the album let the drums down a little bit, in certain songs ("Into The Fire" comes to mind) the drumming just felt very stagnant, lacking energy and was possibly a little bit loud for the songs. A small quip, but an important one.

"Play It Loud" is an entertaining, if somewhat superficial album. For a debut full-length it is a highly recommendable release. I hope to check back in with the band on their second album to discover a bit more personal character in their sounds and a tad more polish on their song writing. 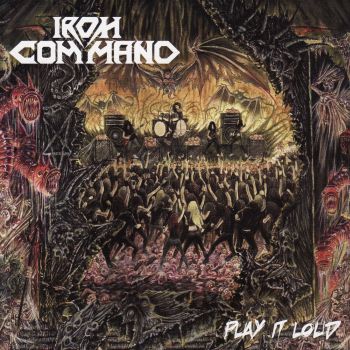