The new album from DAVID REECE Blacklist Utopia is going to release on October 29th, 2021. The album contains 13 new songs, which are again produced by Andy Susemihl. DAVID REECE is going to introduce the first video of the new album I Can’t Breathe.

DAVID REECE has created quite some classic albums during his eventful career.
He left his mark on bands like Accept, Bangalore Choir, Bonfire, or the Sainted Sinners and enriched the albums with his charisma and unique and outstanding voice. And the new album “Blacklist Utopia” will soon become a fan-favorite as well for sure.

The super successful collaboration with Andy Susemihl (a.o. Ex-U.D.O.) as a guitar player, songwriting- and recording partner, which already made the predecessor album Cacophony Of Souls an absolute listening pleasure goes into the next round.

And DAVID REECE seems to have found an almost inexhaustible resource of fantastic vocal lines and thrilling choruses, while the band creates the music for it.

Also, Bass Player Malte Burkert has been established as a constant songwriting partner and new drummer Francesco Jovino (Ex- Primal Fear, Ex- U.D.O.) gives the album an additional kick and metal touch!
Ex-Accept meets ex-U.D.O. is ready for the next round. 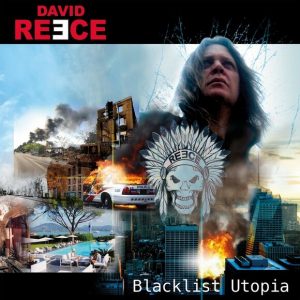