CAUGHT OUT is an Australian Metalcore band from Hunter Valley, New South Wales. In the band’s own words, "Five mates who enjoy writing and performing their unique style of music for all to hear." Originally CAUGHT OUT played a punk influenced style of music but I will be reviewing the band after they underwent a major line-up change in early 2013 and shifted their musical direction towards Metalcore.

CAUGHT OUT was formed in 2011 by clean singing lead guitarist Josh Childs and now ex-guitarist Russel Paplauskas. Childs and Paplauskas then recruited drummer Buddy (Bud-Lite) Edwards to provide a beat to their riffs. Bass trials failed to provide a bassist with the right feel for CAUGHT OUT until Paplauskas asked Josh Sampson, a friend from work to come to practice. "He liked what he heard, picked up the bass guitar to join the band and has been bringing the bass drops ever since." The last piece of the CAUGHT OUT puzzle was the frontman. Most of the band knew of experienced frontman Joshua (Stu) Stewart through friends of friends. "Within minutes of coming to practice, he was writing lyrics and giving the songs the final touches they needed." Every piece of the puzzle had fallen into place. CAUGHT OUT were soon playing live shows and receiving positive feedback. Just prior to recording ‘Set in Stone’, Paplauskas left the band move to Western Australia. Guitarist Dominic Godschalk was selected as his replacement and played Paplauska’s guitar tracks on the recording. CAUGHT OUT released their debut EP ‘Set in Stone’ in November, 2013. ‘Set in Stone’ was recorded at Tomirock Studios in Newcastle, New South Wales.

I must admit, I was sceptical before listening to ‘Set in Stone’. I enjoy good Metalcore but it is becoming ever more difficult to find a decent sounding Metalcore band that plays truly original music. To my relief, CAUGHT OUT was exactly what I was searching for. As soon as ‘Transform’ started playing, all doubt disappeared and I found myself immersed in a fascinating soundscape.

Let me start by saying: the vocals are good. Frontman Josh Stewart’s harsh vocals fit CAUGHT OUT’s full on instrumental attack to a tee. I honestly can’t praise his abilities enough in this review, even his timing is immaculate. Stewart is also CAUGHT OUT’s main lyricist and the deeper I get into ‘Set in Stone’, the clearer it becomes that Stewart has a lot of songwriting potential. My head starts nodding in agreement to this new-found brutality, then lead guitarist Josh Childs’ soaring clean vocals enter the soundscape. Wow! This is what made me appreciate Metalcore at age sixteen; the vocal extrapolation between Stewart and Childs is truly special. I especially enjoy the duet chorus in ‘Glass Heart’. Both vocalists have their own unique styles and each utterly suit CAUGHT OUT’s Hardcore influenced Metalcore sound. Instrumentally CAUGHT OUT is also a strong unit. Guitarists Josh Childs and Dominic Godschalk both display a lot of talent in their performances on this recording. The guitar work on ‘Set in Stone’ is truly world class. Expect to hear piercingly beautiful arpeggiated acoustic chords, palm muted staccato riffs and everything in between. Similarly, drummer Buddy Edwards is no slouch. His drumming is tight and precise, there aren’t "too many" fills in the tracks and his beats are consistently good. Edwards meshes well with bassist Josh Sampson and together they are an extremely dependable rhythm section. Edwards’ drums and Sampson’s bass tone are always there to thicken the mix.

To compare CAUGHT OUT’s sound to other artists, you don’t need to look much further than their influences. CAUGHT OUT’s influences include international bands; A Day to Remember, Bury Tomorrow and Atreyu, as well as locals Parkway drive, Northlane, Hand of Mercy and In Hearts Wake. I was very impressed with CAUGHT OUT. ‘Set in Stone’ is worthy of 4 roos (stars) out of 5. 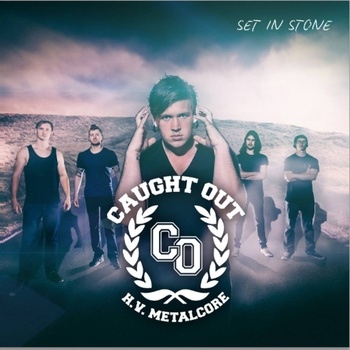