After a Covid caused hiatus in 2020, STORMRIDER HEAVY METAL FESTIVAL is back for its 7th year with a best of WA line up which is sure to please even the most discerning of metal heads!

Perth’s enigmatic prog metal five-piece CHAOS DIVINE have well and truly immersed themselves in a realm of sound and style matched by few, and admired by many.
With a suite of industry accolades, national and international tours, and appearances at major music festivals under their belt, CHAOS DIVINE have carved out an impressive reputation for delivering a powerful and dynamic live show.
The band has played alongside some of the biggest names in rock and metal including SLAYER, MASTODON, TESSERACT, ANIMALS AS LEADERS, ARCH ENEMY, KATATONIA, FEAR FACTORY & TRIVIUM and we welcome them as our headline act for STORMRIDER HEAVY METAL FESTIVAL 2021!

SILENT KNIGHT are coming at full force with strong Power Metal roots influenced heavily by melodic European bands IRON MAIDEN, HELLOWEEN & GAMMA RAY, fused with the aggressive speed of American bands ICED EARTH & MEGADETH! Having played festivals in Europe and Asia and numerous Australian tours as well as opening for bands such as HELLOWEEN, DRAGONFORCE, ZAKK WYLDE’S BLACK LABEL SOCIETY and a tonne of others, this energetic live act is definitely not one to miss!

Death metal was meant to be an assault on the senses but somewhere along the way bands started taking it easy, getting complacent. Enter DEPRAVITY. They show us how it’s to be done, to play devastating death metal without straying from the genre’s roots. This is what MORBID ANGEL should’ve sounded like today. There’s no going back or forth. This is it. This is the fiercest expression of death metal while remaining relevant. Louis Rando (IMPIETY, THE FUROR) and his team of musicians conjure up a maelstrom of wicked death metal that lays waste to all else. Vile, twisted and deafeningly heavy!
For fans of – IMMOLATION, MORBID ANGEL, THE FUROR, HOUR OF PENANCE, SUFFOCATION … you get the idea, they are FKN HEAVY!!

Pure Western Australian Thrash band COLD FATE return to Stormrider! For fans of Bay Area Thrash, we’d highly recommend booking in the chiropractor for the following morning or having a neck brace on standby. You know what you’re in for here!!

New kids on the block MIDNIGHT FURNACE join the line-up after hitting the pubs & clubs hard over the last year. A killer blend of Heavy Metal & Rock, influenced by bands like PANTERA, SLAYER & DEFTONES these lads are out to impress!

Taking inspiration from 90’s melodic death metal but doing it faster and angrier than ever before, THE HARVEST TRAIL have just released their debut album, INSTINCT and we welcome them aboard to Stormrider Heavy Metal Festival 2021!
THE HARVEST TRAIL is a new name on the circuit, but features established musicians from other metal acts such as CLAIM THE THRONE & RED DESCENDING if you haven’t seen these guys yet, they absolutely crush!! 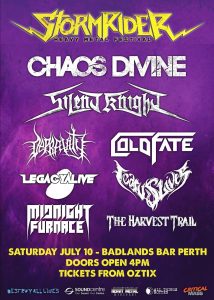