I feel like I’ve been bludgeoned with a sledgehammer. From the outset, this album is relentless in pursuit of thrash metal bliss. With Tynan Reid on vocals and rhythm guitar, Cameron Turner lead bass, Matt McIntyre Bass and Adam Cinelli drums, Cerebral Contortion has not only put together an extremely tight (albeit short – 30 minute) album, they have done it extremely well.

With all moving parts working in conjunction like a well-oiled machine, this album offers short, concise and very fast tempo riffs. That mixed with the double-barreled bass duet and continuous double kick (even triple kick) bass drums all produced very well by Ryan Huthnance at Emissary Studios, this album does kick some serious arse.

Apart from the musical rush is a very thoughtful and seriously written album. It leads into the title track with a slow tempo riff, just to give you a false sense of security…then the explosion begins. “Such Heroic Nonsense” is the second track damning the warmonger world for its neglect of humanity. Backing up this political intent are tracks such as “Caustic Flash” and “Execution”. “Devouring Disease” is a warts and all, in your face reality check about the third world. “Extinction” and “Urban Renewal” scream at the human race for its systematic rape of the earth. With the final track “Body Harvest”, looking into the future of
stockpiling bodies to save lives (well that’s my take on it).

If you could compare this release to anything in the past I’d say musically it is very close to Slayer’s – Reign in Blood crossed with a political slant similar to Metallica’s – And Justice For All. If you like your thrash (or even if you don’t), I suggest you get onto this album. 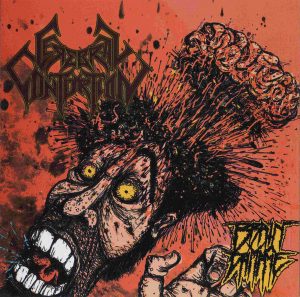