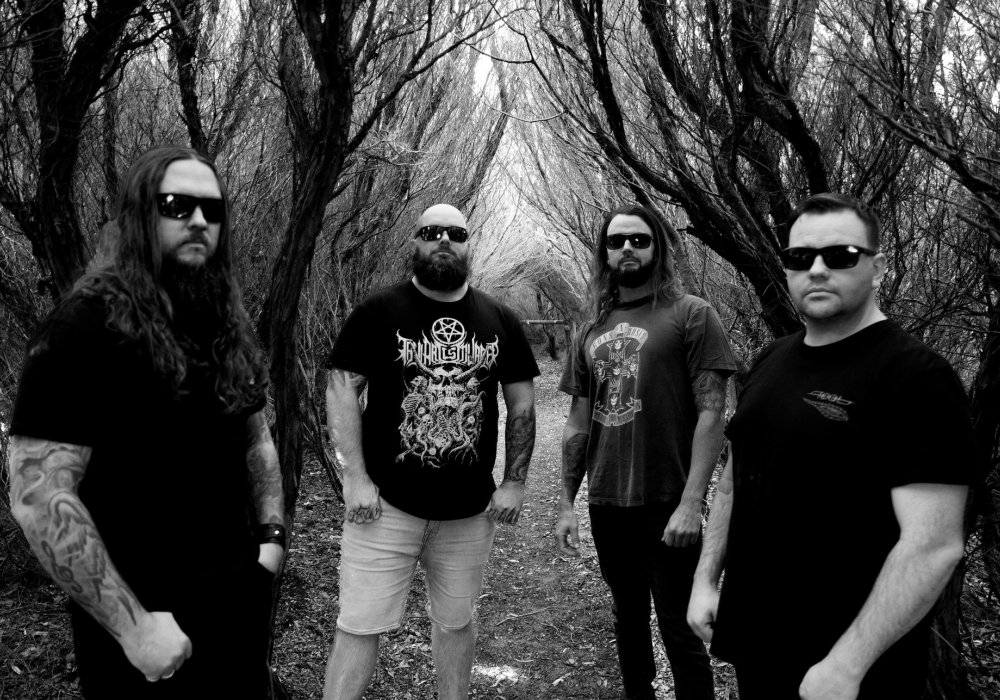 Hailing from Newcastle, Australia . Chaosaint blur the lines between groove metal and melodic hard rock. The band’s roots date back to 2001 as the members of a former group known as “Exhale.” However, the combo took somewhat of a lengthy break before eventually coming back to life with a newfound identity and a completely revised musical direction. A new EP “In The Name Of” was recently released so we caught up with the band to find out more on the release.

Metal-Roos: You describe your music as blurring the lines between Groove metal and melodic hard rock, what were some of the big influences in you forming your own sound in this way?

Chaosaint: When we initially kicked the band off again we actually had the intention of becoming a pure straight-ahead Hard Rock band- similar to Motley Crue and Skid Row, the first few songs we wrote were all written with that goal in mind. As we jammed more and more we found a lot of our original influences such as Pantera and Machine Head started to come through, and the songs became progressively heavier. Instead of attempting to subdue that we embraced it and kind of amalgamated our influences. Heavy riffs and drumming with more melodic vocals. The original recordings of these songs were performed with entirely clean vocals but we soon decided to re-record the tracks with heavier gruff style vocals about halfway through the recording process. Both Eyes Open is one of the more hard rock-inspired songs that made it through from the initial songwriting process

MR: It’s often easy to get caught up in past bands but what are some modern artists you’ve been enjoying?

Chaosaint: I can’t answer for everyone but currently, I’ve really been enjoying some of the bands from our local scene. Really digging the stuff Faith In Lies are doing. Purenvy is another band from Newy (Newcastle, NSW) that are doing awesome melodic thrash that I really enjoy. Immorium from Canberra is killing it. I heard their new single the other day and swore to god it was Soilwork. As far as international bands go I am really loving Jinjer at the moment and the last Fit For An Autopsy album is one of the heaviest things I’ve heard in a long time.

MR: Earlier this year you released your debut EP, that’s a very exciting step for the band; what’s the reception been like and how does it feel to have it released finally?

Chaosaint: For us, it’s really the culmination of a few difficult years and a shitload of hard work- losing ¾ of your finished product and having to start again takes the wind out of your sails a bit but the end result was well worth it. The reception we received for it was way beyond what we had ever imagined. We were confident we had a well-sounding production and a decent collection of songs but for a band that has not yet even played a live show to gain fans as quickly as we have and for our second single to top the Triple J Unearthed charts for 3 weeks in a row was pretty mind-blowing.

MR: Obviously, it’s an interesting time we live but how excited are you guys to start doing some live gigs once restrictions start to ease up?

Chaosaint: We can’t wait to bring these songs to life on stage. We’ve spent the last few weeks sharpening our tools in preparation as well as working on new material. We definitely miss the opportunity to get out and about in the local scene and meet new fans. Especially from a promotional point of view, it’s great that we have social media as a tool to connect with people but it won’t ever replace the engagement you get from going and seeing a live show and actually interacting with your fans.

MR: The songs on your ep have some very raw and emotional lyrics, how did you go about coming up with the lyrical themes and content for the songs?

Chaosaint: The lyric writing process is probably the thing I struggle with the most. Sometimes things will just flow and a song will be finished within a few minutes of putting pen to paper, other times there might be a lyrical hook for a chorus and it’s weeks until the rest of the song is formed around it. There are songs like ‘In The Name Of’ that Cribby had a very definite theme for and had penned some rough lyrics for which I adapted or added too, but I rarely ever sit down with a theme in mind it’s usually a pretty spontaneous thing- I’ll be driving around in my car and an idea will hit me
and I’ll quickly record it into my phone and go back and work on it later.

MR: You’ve mentioned that your working on some new material to possibly be released in 2021, what can fans expect from the new songs?

Chaosaint: There were a few songs that were lost from the last recording session that was written at the same time as the songs from ‘In The Name Of’. We’ve been working on those recently- one of which is an absolute 9 min epic with a heap of twists and turns to it- so we are really looking forward to getting that one out. Some of the new riffs and rough ideas that have been floating around are still very much in our Groove Metal style but there are a few thrash elements and a
few heavier 7 string / down-tuned songs in the works as well. It’s only early but I would say things will most probably only get heavier if anything.

MR: Is there anything else you wanted to say to the fans?

Chaosaint: Just a big thank you for the support, keep supporting your local scene especially in the hard times we are all facing at the moment and hopefully we can see you soon.