Norwegian Hard Rockers Duckwalk Chuck has been active for 20 years, this year. To celebrate their anniversary, Duckwalk Chuck has recorded a brand new rockin` album. Fired Up, the album is more varied in the expression musically than their previous release High Speed City. Further, the quality of the production has also got a boost compared to the 2017 release. The album, Fired Up, will be released on 17 September via CD Baby and also will be available on most digital platforms.

Singer Arvid comments: “It’s all about good-times and Rock n’ Roll! Get the party started with Fired Up”

Like Duckwalk Chuck‘s previous album, the album artwork for Fired Up has been created by the amazing Ole Andre Hauge. With countless references to the band’s history, the cover is also a continuation of the cover art of High Speed City. The band used COVID restriction reliefs during Easter 2021 to record tracks for the album. Duckwalk Chuck was assisted again by producer and technician Bjørn Erik Sørensen at Artbeat Studio. Bjørn Erik supported the band in polishing and lifting their work both musically and sonically. This has really given the sound and expression of this album an incredible boost and loads of punch. YES, Master Studio in Nashville mastered Fired Up.

Fired Up will be available in digital and physical formats (CD & LP). The first vinyl edition will be limited to 100 numbered copies on black vinyl.

The band continues with the grand old recipe of Straight in your face, good-time rock ‘n’ roll. In their music as well as in their lyrics. 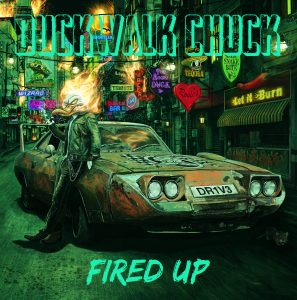 Get the album on AppleMusic or Amazon.