Australia/USA based Metal band End of Days is set to drop their debut EP A World Reborn on October 1st independently, packed with groove and raw sound. All songs reflect how the world is today. On vocals is Sean Zatorsky from Sinsaenum.

While there is one softer song on this EP which was made for the drummer’s late mother, we wanted to put it on the EP for anyone who has lost loved ones through these hard times.

This EP strongly reflecting the world we are in today so sit back and enjoy what you are hearing.

The band is today releasing the lyric video for the song Scare-American Dream.

Sean Z about the single/video:
“I wrote the track at a rough time in America, in the middle of the pandemic, I watched riots break out in every city.  I watched cities burn,  our capital stormed, and taken over. Our money was being spent like it was in an endless supply, and a president could care less about the real problems facing this country.   The American dream was dead and the only thing left was fear.  People refuse simple modern science and medicine but run to the hospital when they get sick. The Scare-American Dream was a perfect title for that’s what this country has evolved into. The lyrics were inspired by George Carlin “the funny thing about the  American dream is you have to be asleep  to believe it”

Tim adds:
“Sadly everything Scare-American Dream is written about has become somewhat a reality for Australia now.” 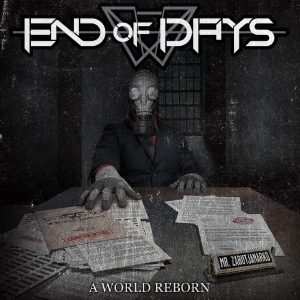 Get the digital album at their bands Bandcamp page here: https://endofdaysofficial.bandcamp.com/ or on iTunes: https://music.apple.com/album/id/1585545129