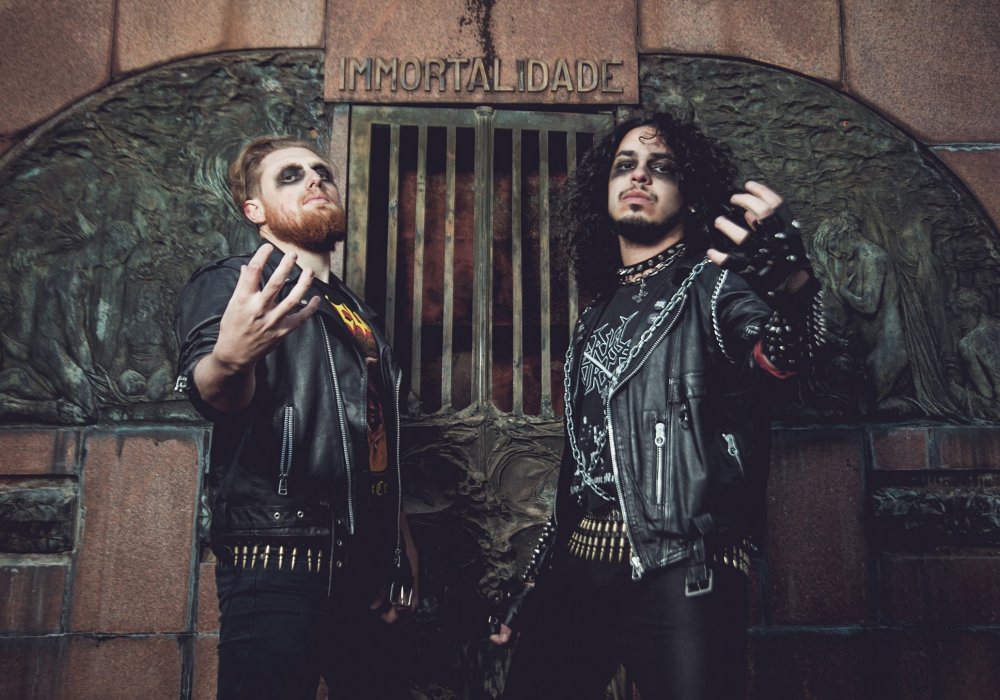 Evilcult was conceived by Lucas “From Hell” in 2016, as a way of creating an own and original sound, uncommon for the region. Coming directly from Bento Gonçalves, Serra Gaúcha, Evilcult performs music paved on the first wave of Black Metal, Speed Metal and Old School Thrash Metal. It’s biggest influences are bands such as Venom, Bathory, Destruction, Sodom, Hellhammer, Sarcófago and current bands such as Cruel Force, Nocturnal and Deathhammer.The band released it’s debut album “At the Darkest Night” earlier this year, we caught up with the band to find out all about it.

Evilcult: Thank you Metal-Roos! It is an honour for us to answer this interview!

MR: Tell us a little bit about Evilcult.

Evilcult: Evilcult is a Black/Speed​​/Thrash Metal band from the South of Brazil formed in 2016. In 2017 our first EP “Evil Forces Command” is digitally released, having great acceptance in the underground. In 2018 the EP is released on CD in Brazil in partnership with three labels and on k7 in Peru and Bolivia. In 2019, two singles are released: “Eternal Cult of Darkness” and “Necro Magic”, earning two contracts for the band, with the Chinese label Awakening Records for the release of the Debut album on CD and with the German label Diabolic Might Records for vinyl. Finally our debut álbum “At the Darkest Night” is released in June 2020 on CD and digitally through Awakening Records. In August, it is also released in k7 through the Polish label Sign of Evil Productions. The vinyl version is due out by the end of the year.

MR: At the Darkest Night, the debut album, has been released a couple of months ago. How was the reception with the fans?

Evilcult: The reception could not be better! The album is being distributed worldwide, earning good reviews, comments and high notes in several countries. It is also being played a lot on digital platforms like youtube, Spotify and Bandcamp!

MR: Something that is a little bit unusual is that Evilcult is a duo. How was the recording process of the debut album?

Evilcult: Yes, we are a duo of musicians not very experienced, so the process of recording and mixing the album took a long time. Blasphemer recorded all the drums and then I (From Hell) recorded all the guitar lines, bass, vocals and finally the solos. We wanted a production that sounded vintage but well done, so we took a lot of time to tone and then mix each instrument. It was our first experience of a really professional recording, but in the end, everything worked out and we were very satisfied with the result.

MR: Also the video Drunk by Goat’s Blood is out now. Tell us about the making of the video.

Evilcult: We made this video of the opening track to further promote the album and show the band’s face and attitude. We are old school metal maniacs and we wanted to show this as clearly as possible. So we made a look with a lot of leather, chains and spikes and stuff. We also made a scene as if it were a live show, with a lot of smoke, candles and skulls, with no history, just real metal right in your face! The vintage VHS effect also made it even cooler in the end, haha.

MR: How is Brazil’s underground metal doing currently? Considering that the country is very well known in the metal world.

Evilcult: We consider that the Brazilian underground is doing very well at the moment. We have great bands coming up, bands gaining international visibility and becoming more professional, good channels of publicity on the internet and labels dedicated to launching the largest number of albums possible, in all styles of metal. We just have this uncertainty about the shows and festivals at the moment, since all of this is at a standstill and is not expected to return in the near future.

MR: One thing I noted is the band’s theme… with lyrics about satanism, blasphemy, and others. What is the band trying to say through the lyrics?

Evilcult: We are not Satanists and do not really believe in these things. However, we are anti-religion and we use this diabolic imagery mainly to shock and go against the morals and good customs imposed by religion. We also think it’s cool to talk about these themes and it matches the band’s sound and style.

MR: The world is on standby due to Coronavirus. How does it affect you?

Evilcult: Unfortunately we were unable to do a release show for the album and no more shows or tours. So we had to promote the album exclusively on the internet. This sucks, but it’s what we can do at the moment, so let’s do as much as we can in these media and produce a lot of merchandise for sale online. And as soon as concerts are allowed, we hope to play a lot across the country!

MR: Send some cheers to all the fans of metal.

Evilcult: We want to thank all Metal maniacs around the world who enjoy our music and somehow helped us to publicize the album and the name of Evilcult! We hope to meet several of you in the future! Cheers from Brazil!

MR: Thanks, Evilcult for the interview. It was an honour to have you here. Please tell us your social media to follow your career.

Evilcult: It’s an honour for us too, thanks for the time!