Slow burners Weeping Silence are finally gaining some attention outside their home country of Malta and outside of Europe. Their fourth album in eight (or so) years and their heaviest to date, For The Unsung may just be the one to break through into the annuls of symphonic metal notoriety.

In the vein of Epica and Nightwish, vocalist Rachel Grech belts through nine tracks, with the assistance of Joe Grech and his death metal growl. The constant parrying of the two voices provides a contrast between the gothic/operatic and the satanistic baritone that typifies music from this genre.

It’s the second track from the album, ‘Love Lies Bleeding’, that is getting the most attention from the media, and it seems also to be a favourite of the band members themselves. This is all with good reason. This piece blends a balanced mix of instrumentals and gothic style vocals, with that ever-present Taliana scream. It begins fairly quietly and builds into a crescendo of sound.

Not taking anything from the other songs on the album, the other really notable track is ‘Bitter Screams’. In this song, there are many hooks; from the melodic voices to the seamless instrumental switches through a variety of instruments and tempos.

Most of the music relies heavily on punters listening to the lyrics. Sometimes this can be hard work, not only because diction and annunciation isn’t a strong point of death metal vocalists, but because a number of tracks sound almost too similar. Listeners could find themselves drifting and the music becoming background noise. Tracks like ‘The Search Within”, while technically awesome, do not have enough tempo changes to hold the attention, even with the inclusion of the voice of Anders Jacobson (Draconian) but having said this, there is a lot to commend this effort overall.

Not every pleb is up to playing and singing this type of music, and only the most genius of musicians could sound any good without at least some classical training. Singers need big lungs to attain the operatic sounds required to compete with orchestral notes. Weeping Silence has the technical prowess required in spades.

It would be great to see Weeping Silence in the flesh. It’s not entirely possible to appreciate this big sound from an engineered production. It surely would be difficult though to get all seven members and their equipment on a mammoth flight from far away… but who knows? If we give them the support they so duly deserve, we may just see them soon. 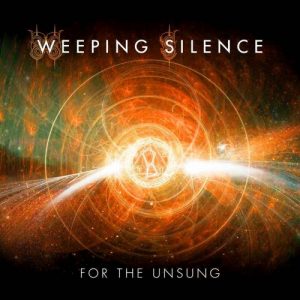