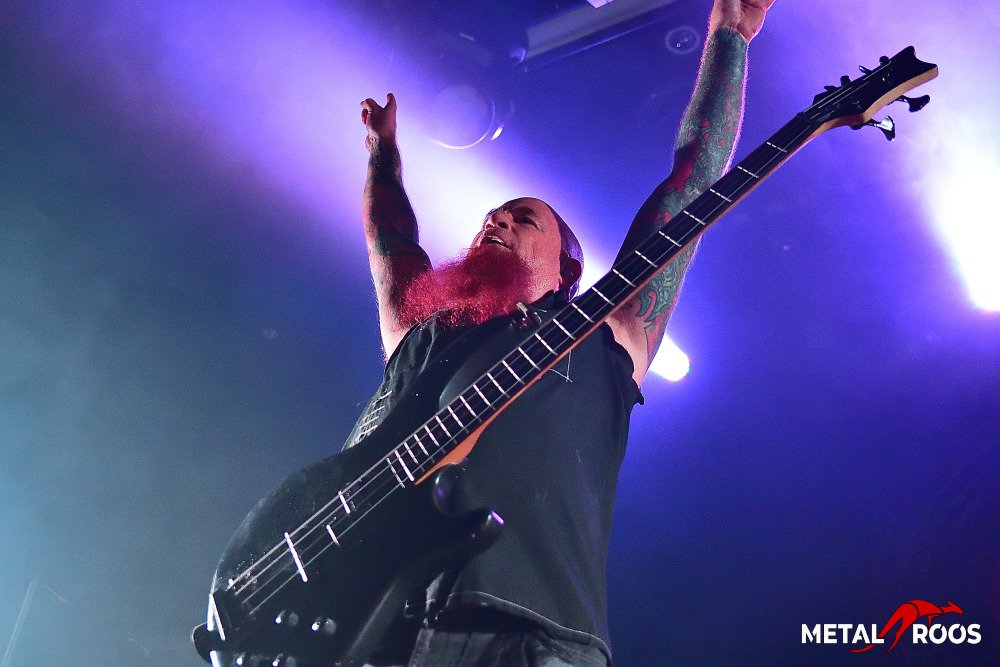 The Devilskin Australian tour for their latest album ‘Red’ has been delayed numerous times (and even this time Perth still miss out), so there was an excited buzz among the Manning Crowd on this balmy Friday night that this show was finally going ahead.

These Four Walls from Auckland via the Gold Coast, trade in a thumping, melodic brand of Metal that opens up the evening perfectly. Singer Steve Gibb has great range, and his powerful vocals elevate the multi-layered songs,  while the bass & drums bulldoze things along, Gray Vickers guitar leads add plenty of colour & movement on top.

It’s clear from the energy onstage, that the band are stoked to be opening this fantastic showcase of Kiwi Metal! (hell after the last 2 years, theyre probably stoked to be playing anywhere).  The detour through “Whole Lotta Love” near  the end of the set sealed the deal with the crowd, and I was left thinking “The next band will do well to top that…”

Well…  I hadn’t seen or heard Shepherds Reign before last night, which Im glad about, because the Impact of being exposed to these guys for the first time in a live setting is AMAZING! The intro of the traditional Polynesian folk singing gives way to a Roar, and a mass of humanity & hair are onstage blasting through ‘Aiga’, the pounding heaviness of the song punctuated by the singer laughing as he merrily roars through the song. Shepherds Reign are obviously here for a good time, which for them means pounding the Sydney crowd with “the power of Polymetal”. The fact that most of the songs are delivered in a language other than English only increases the impact of the songs… ‘a Polynesian war cry with heavy metal backing’. More highlights were ‘Legend’ with its tribal percussion, new song Ala Mai (Awaken), and also the closing double of ‘Le Manu’ and ‘Samoa Mo Samoa’.

Shepherds reign were a Revelation tonight, make sure that you catch them this tour! Once again, I found myself asking ‘how do the headliners top that?’ Massive props to Devilskin for putting this bill together! It’s a wonderful showcase of three different, but very vital New Zealand bands.

The familiar sound of Car Horns into the pulsing bass heralds Van Halen’s ‘Runnin’ with the Devil’ as the perfect intro for Devilskin, before the band launch onstage amid a fusillade from the drummer & Singer Jennie Skulander wielding a Dry Ice gun. (I thought for a moment that she’d pilfered a fire extinguisher from the backstage Fire closet). Second song ‘All Fall Down’ with its groovy riff & catchy chorus has the crowd well in the mood… , dancing with big smiles & singing, screaming & bellowing along.

Just as an aside, Guitarist Tony Vincent & Bassist Paul Martin’s matching dyed red Billy Goat beards cant go unmentioned, along with all the jumping about that they do, its like having a pair of Scott Ians on stage.

Next up is ‘Pray’ which features an immense vocal intro from the singer… amidst the constant high kicking, & general leaping about, she has a truly mighty voice! From the death growling of ‘Do you see birds’ to the soaring ‘Corrode’, she truly has all the gifts.

In a set full of highlights ‘Until You Bleed’, ‘Voices’, ‘Start a Revolution’ & ‘Everybody’s High but Me’ are all absolute crackers!  The band have multiple number one albums in New Zealand, and its not hard to see why they have such a following… the band is sensational live, delivering a set bursting with great tunes, by a charismatic singer at the peak of her powers.

The set ends in a thrash out / white out, Jennie making the most of her Dry-Ice Gun, once the smoke clears, the band photograph the crowd & depart.  The (well deserved) encore of Little Pills gives the beaming crowd one more to go home with before they’re done.

This is a sensational bill, showcasing the best of NZ Metal! I seriously recommend catching it if you have the opportunity!

The Other Festival – 13th February 2021 @ The Fortitude Music Hall After 12 months of planning, COG & Nobody Presents “The Other Festival” – after a long hiatus I am back reviewing the amazing […]

Lagerstein have turned Crack the Kegs – Brisbane into a two-stage mini fest with their friends at The Brightside! Now, with the addition of killer bands like Seraphic, Virtues, F.U.C. and Peruvian Flashback, this has […]

Devilskin set to tour Australia this April/May with Shepherds Reign

In what seems like an eternal rollercoaster of close calls and postponements, Silverback Touring are pleased to announce that after several attempts, the long-awaited DEVILSKIN “RED” Australian Tour is finally happening. The hard-hitting Kiwi band […]