Swedish saviors of heavy metal HAMMERFALL let the hammer strike again with their twelfth studio album, Hammer of Dawn, set to be released on February 25, 2022 via Napalm Records! The album’s release is preceded by the arrival of the first single and title track, “Hammer of Dawn,” accompanied by a music video filmed at Liseberg amusement park in Gothenburg, and by famed director Patric Ullaeus.

Oscar Dronjak on the single:
“The song itself was initially conceived in Germany during the World Dominion tour, with the rest of the work being done at home. I immediately knew this had the potential to be something important, and when Joacim added his vocal melodies we both felt it would be the perfect single. One with substance and power but also one you can’t stop singing when the music fades out.”

Joacim Cans adds on the video:
“We already had the idea to shoot a video at legendary amusement park Liseberg 20 years ago. But like any good bottle of Champagne this idea needed to rest and mature before taken into action. And FUCK I am happy we waited!

Together with director Patric Ullaeus we have created something unique and astonishing that totally blows me away every time I watch it. You can really tell that we haven’t played together for almost two long and never-ending years. We are as energetic as a pack of hungry wolves in the video ready to shred and deliver the heavy metal gospel!” 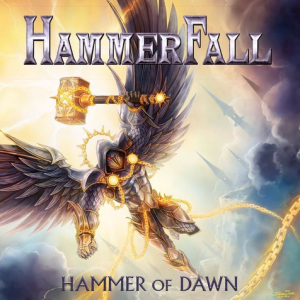 INTERVIEW: Oscar Dronjak of HammerFall on Hammer Of Dawn and having King Diamond as guest vocalist

22 February 2022 Andrew Massie INTERVIEWS Comments Off on INTERVIEW: Oscar Dronjak of HammerFall on Hammer Of Dawn and having King Diamond as guest vocalist

The Swedish saviors of heavy metal HAMMERFALL let the hammer strike again, radiating power on all artistic levels with their twelfth studio album, Hammer Of Dawn! When HAMMERFALL released their debut album, Glory To The Brave, in 1997, they not only […]

Today, Swedish Saviours of Heavy Metal HAMMERFALL have released a second single, “Venerate Me“, featuring a special guest appearance by none other than the legendary King Diamond, alongside a new visualizer! The track is cut from their twelfth studio […]

In the many varied worlds of heavy metal, there is an often overused descriptive, that is bombastic. Webster’s dictionary defines this as “ Writing that is given exaggerated importance by artificial means. Pompous, overblown” None […]