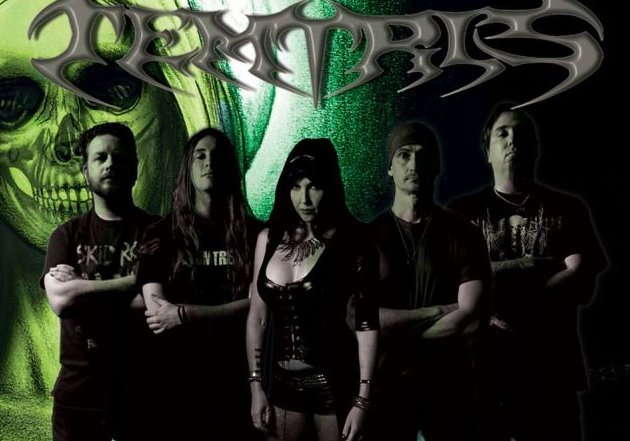 Temtris are a five piece act from the south of Sydney, Australia.They have just released their third album “Shallow Grave” so we chatted to singer Genevieve Rodda about the new album.

Metal-Roos: How long has Temtris been together for?

Temtris as a band has been around since 2000. We started in Sydney with Wayne Campbell on board – he was the original drummer from Mortal Sin. We met up with him and he ended up joining me along with Anthony Fox, we started jamming and decided to throw this band together, we got Lew on board to help with some recording and he threw in some death metal vocals to try something new. We thought it worked well so he stuck around and unintentionally became a member of the band. Before we know it, we began recording an album – “Threshold”. It was self released so it wasn’t on Battlegod at the time. Temtris was just gigging around Sydney, Wollongong and Melbourne touring with Dungeon and Pegasus. So that was where it all kinda started from and it’s been going ever since.

Metal-Roos: Temtris has released your third album “Shallow Grave”. How has it been received so far?

The reviews so far have been pretty amazing and we’ve been blown away. You know, we have had a couple that have been a bit…. you know…. I guess they didn’t get us… we have a lot of mixed genres in our music. If you listen to our new album, we are a traditional band but we have elements of black metal on some of our songs, death vocals along with traditional singing with my vocals. A lot of people don’t understand our style, so we have had a few reviews who didn’t get where we are going but then we get reviews that say they love the fact that we are not restricting ourselves… just giving the song what it requires. We even got a ten out of ten which I thought was impossible to get. But most of the scores have been 8 or 9 out of 10 – worldwide! So that’s been amazing for us, it makes you feel good and can’t wait to record another one.

Metal-Roos: Going on with the reviews, you received one from Terrorizer magazine – what was it like reading it?

We actually work with Battlegod Productions and a company called SureShock. When your album is finished, they send out promo albums to all these magazines and radio stations around the world and Terrorizer was one of them. They reviewed it and gave us quite a good score. If you look at the scores most bands receive from the magazine where most around the 6 or 7 and we got a 7.5 – we were pretty stoked.

Metal-Roos: Are you a classical trained singer or self taught?

I had 12 months of singing lessons but that was a long time ago when I was 14. I did all the proper training with the scales and pitching and that kinda stuff. My singing teacher wanted me to do opera because of my vocal range and deep voice, but it wasn’t the thing I was into. At that age I was into Guns n Roses, Maiden and Metallica. I did not want to go down that road and that was when I joined my first band. I’ve been singing for a long time and found my own style. I have had to adjust my singing over the time, and recently had to learn how to look after my voice to make it last and not destroy it.

Metal-Roos: What was the recoding process of “Shallow Grave” like?

It was quite long; we had a few hiccups along the way. When we first started writing songs, we had a drummer change which caused a few issues for us because we were just about getting ready lot to record. We recorded “Your time has come” which was released as a single. We used a producer called Sid Green, he was the drummer for the band Mantissa, to help us with “Your time has come” and we decided to use him again when we got back into the studio. We got our drum tracks laid down – that took about a week to do – but during that time he got offered work overseas so we lost him. That was disappointing and really upsetting for me personally because he really did a great job recording my vocals on “Your time has come”. So I was really looking forward with working with him again. Then we had to go into a home studio and did the guitar tracks on top of the drums, we had professionally recorded with Sid Green. I went somewhere else to do my vocal part. Once it was done it was sent off to Tim from Lord and he mixed and mastered it for us. We are really happy with the results. It’s a great sound but has the vibe that we are all about.

Metal-Roos: How is being a female in a predominantly male scene?

It’s very interesting. Iit’s funny because it has taken me a while to climb up and be recognised. Just because it’s a male industry… but it is changing. Over the last few years there are more female singers, not that there haven’t been female singers around… Doro Pesch is one of my favourites. There is a point where you have to prove yourself but the hardest thing for me is when people see me and go “ah look, a chick singer” and they don’t bother to listen because they judge you automatically. And I do it myself as well. I’m not a big fan of the symphonic vocals and not a big fan of the operatic sound. So they look at me and expect that’s what I’m gonna do but once they hear what I do instead they go “ah, alright that’s what she sounds like”… their outlook changes. That’s what a lot of the reviews have been saying – she’s not singing like Nightwish, it’s not coming across like that.

Metal-Roos: What was your reaction when you heard the news you were opening for German metal giants Accept?

I was jumping around the house! I received the message about a month before it was announced that Accept had actually picked us – it wasn’t a touring company but the band themselves. We had sent off the usual submissions, Facebook page and music links… yet to know that they had chosen us was probably better that anything… getting recognition from a band that has worked all these years and are one of the metal greatest. We have never made it onto a major international show before. So we are really focused on putting together a great show. We have reviewed footage from previous gig, picked the crap out of them and look at how we can put on a great show in Sydney.

Metal-Roos: When you go on tour, what’s the one thing you can’t leave behind?

Ah well, we have left lots of stuff behind before… on a trip to Brisbane we have left stuff behind. I guess you can always borrow equipment but we couldn’t leave behind the seven stringed guitars. Not every band has one of those to lend us. For me personally, I would be disappointed if I didn’t bring my wicked outfit I try to wear at shows. It’s probably a girl thing but I gotta look for something awesome to wear on stage – partly to look professional… I often look at some of the other bands and wonder what effort they put into their shows. The only rule for Temtris is that the boys gotta wear black and I can wear what I like. I have pants that look evil and wicked.

Metal-Roos: Do fans give you any strange gifts?

Actually I have been sent something from a lovely fan and friend, Craig, last year for my birthday. He knows how much I love vodka and he sent me two 1 litre bottle of vodka in the mail. When the postie gave it to me I was in disbelief that a friend and fan had done this for me. It was kinda over the top but made me feel pretty special.

Metal-Roos: Who are your major influences?

Our major influences would be – singing wise – Bruce Dickinson, Geoff Tate from Queensryche and female would be Doro… there aren’t many female singers I get into although I recently heard Sister Sin and I liked her vocals. Band wise I like Flotsam and Jetsam. I love the way they can be so heavy but catchy and melodic… I’m a big fan of Iced Earth and even bands like Testament and Megadeth. I grew up listening to AC/DC; my parents had Black Sabbath playing at home but it has progressed. Like when Guns n Roses came out, I loved Axl Rose, also Sebastian Bach’s vocals with that big range he has. On my first concert we covered 18 and life and I sang that. At 14 everyone went “wow, she can actually sing that” and I thought well, this is something I can do.

Metal-Roos: What was the first album you bought?

My first album was a metal album. It was actually a Pat Benetar record – believe it or not. I was about 11 and not long after that I nicked from a friend of my Dads his vinyl copy of AC/DCs Back in Black. I like Pat Benetar because she has a great vocal range and was classically trained. The vocals have been the thing that has always won me over with bands, I think.

Metal-Roos: What 5 albums or cds couldn’t you live without?

Ah, that’s a tough one… I couldn’t live without a Megadeth album… and Iron Maiden and Flotsam and Jetsam… but nailing down 5 albums would be very hard. I’m one of these people who love all metal – I think an Iron Maiden, Somewhere in Time, Powerslave. Ah, I could live without them but would survive with at least one Flotsam and Jetsam and a Doro album in there for the female side of things, but something from her Warlock days.

Metal-Roos: Where do you see Temtris going in the future?

You know, it would be great to say that we would be doing this for a living and not doing the day job thing but I don’t think that’s possible these days. It’s not impossible but whether that’s realistic here in Australia… but it would be lovely to head overseas and play something like Wacken, playing along side those big band would probably make my day.

Metal-Roos: I would like to thank Genevieve for her time and wish Temtris all the best for their gig with Accept and for the future beyond. Always supporting Australian metal….\m/

Temtris hit the Basement in Canberra on a bloody cold Canberra night.  The temp was already about 7 degrees Celsius when I got to the Basement.  But it wasn’t cold inside.  This was the first […]