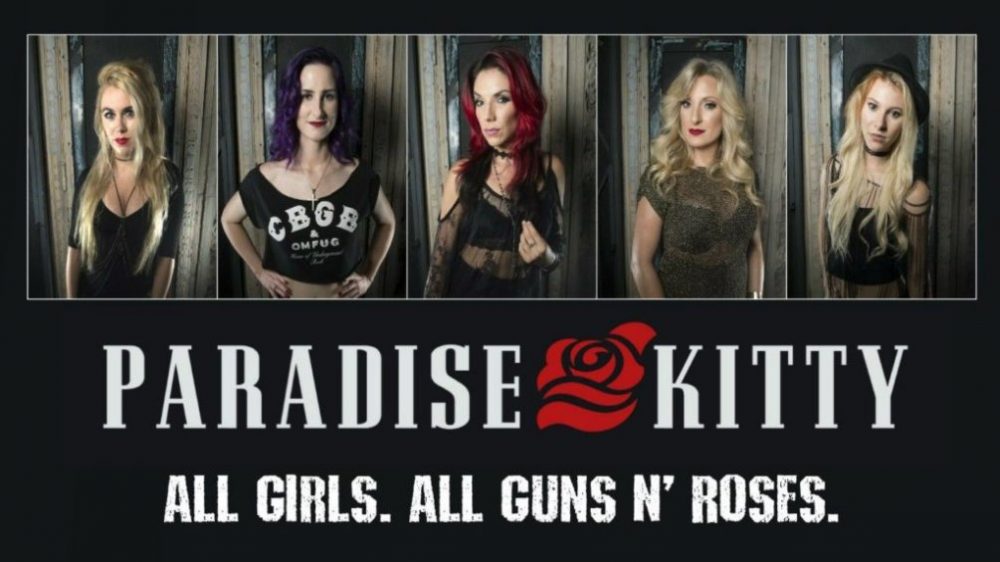 Paradise Kitty is a band of five badass babes born and bred on Guns N’ Roses bombastic 1987 debut, Appetite for Destruction. With serious metal honed chops and raucous reverence for the Sunset Strip warriors that took Hollywood and the world by storm, they are a sexy, smoldering, dead serious tribute that’s out to get GN’R fans far and wide. The band are set to tour Australia in September for the first time ever, we speak to lead singer Jenna Syde about the coming shows and more.

Metal-Roos: Hi! Thank you so much for taking the time to speak to me today…

Jenna: Hi! Thank you for speaking to me!

Metal-Roos: Congratulations on Kitty’s success! You have worked so hard over the past 2 years performing all over the states…and now coming over here…Everything good on the tour so far?

Jenna: Yeah! You know, we just got off tour with Faster Pussycat and that was a lot of fun. They’re like brothers to us, so we couldn’t have asked for a better combo…now we’ve spent the last two weeks at home, gearing up for Australia and we’re super, super, excited!

Metal-Roos: Is this the first time coming over to Australia?

Jenna: Yeah, I think it’s all of our first time, whether working or not, coming over to Australia…so we’re all really excited.

Jenna: Well, umm, expect the unexpected! We don’t really have ‘set’ shows, we pick our set every night and we throw down. You know, we pick up the set and say ‘this is gonna be the set tonight”. Sometimes I’ll be jumping off the stage, sometimes our guitar player Ariel will be doing acrobatics, sometimes I’ll be jumping off the drum riser…we just go crazy… haha. It’s a different show every night…and then we come out to hang out with everybody, so we can get to know our fans.

Metal-Roos: I was about to ask whether you will you be going out into the crowd after your shows over here?

Jenna: Oh yeah! There’s nothing better when you’re on tour, in a different country, and you’re actually able to submerge yourself in the culture. It’s just the best and we can’t wait to meet everyone.

Metal-Roos: Playing the Monsters of Rock Cruise must have been one hell of a time, any highlights you wish to share?

Metal-Roos: Fair enough! Guns n Roses have one of the strongest catalogues in history, what was the first song to speak to your heart?

Jenna: Well, I was a 90’s girl. I was young in the nineties and watching headbangers ball as a little girl during school breaks, and the one that would always get me. I would stay up late and wait for Ricky Rackman to introduce the latest Guns n’ Roses video. So, November Rain was the first one to really get me, that song, the lyrics, I still cry when I see the video, I cry when I see it live, like my eyeballs welling up and tears streaming down my face situation…So that one, just lyric wise and how cool and how epic that song is…

My favourite though from them, is, You Could Be Mine, it’s just got such a punk rock attitude to it It’s my favourite to perform, so that on speaks to me the most from their catalogue, but November Rain was the first to touch me.

Metal-Roos: Is it difficult deciding which songs to play when deciding setlists?

Jenna: Well, we have a few that stick with us and a few that are surprises, but I don’t want to give it away so I won’t say much more…but we try to pick one or two that the crowd pop’s in shock, like “They do That one” type of thing…but for the most part you get the staples and the hits, but it’s definitely a different show and set list every night…and you’ll be impressed!

Metal-Roos: Well, you have said that You Could Be Mine and November Rain are two of your favourites…Can you give me three more to round-out your top five Guns songs? Doesn’t have to be in order…

Jenna: Ok so, my other favourites are: Reckless Life, I love that song, and umm, well of course Welcome to the Jungle, first time watching MTV as a kid growing up and that was one of the first videos I remember off the top of my head. And I really love Used to Love Her, it just makes me laugh every time.

Metal-Roos: It was talked about for years and years, but did you ever think they would re-unite?

Jenna: Oh no, I never even dreamed that it could happen and when it did…well it was funny, cause we didn’t plan on the band starting right around the same time everything came out, we were just asked to do that and thought “You know what, this would be the perfect time to do this, if we’re gonna do it” So, it was serendipitous, I thought “No way, I’m joining a GNR tribute band the same time they’re reforming”. It blew my mind…both that they were re-uniting and that it was happening at the same time we were…it was like it was supposed to happen. But I’m so glad cause I never got to see them…

Metal-Roos: Especially now Axl’s voice is back to full strength…

Jenna: Oh God, it’s so good…I think I saw them four times on this tour and ugh, each show it seems he gets better. It’s just killer and it makes me think to myself “Well, I guess I got some work to do”…hahaha

Metal-Roos: Speaking of workload you guys tour pretty hard. While your over here will you get a chance to do some relaxing or sight-seeing?

Jenna: Oh, actually we get a couple of days this time to have a look around. I can’t wait it’s gonna be so much fun, usually on tour you don’t get that much time to relax or enjoy your surroundings. Usually it’s get up, go to the next town, soundcheck, then sit around and wait for hours till the next show, then go home, go to bed and do it all the next day, you know, and it’s pretty gruelling. So that’s why we are double excited, it’s like a mini vacation.

Jenna: Oh, I don’t know, I really, really wanna touch a Koala! Anything with animals, we’re all big animal lovers. So like a zoo or something, when we have had time off, we go to nature reserves and stuff. 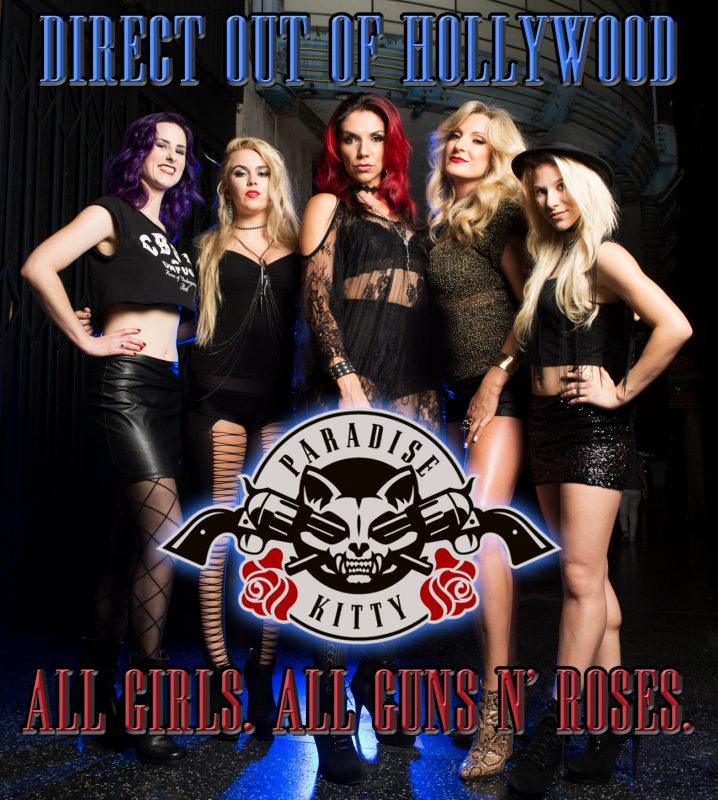 Metal-Roos: Being the vocalist singing those massive songs every night must be exhausting. Any secret live performance hacks for taking care of the voice you’d care to share?

Jenna: Well, I keep fitness in my regime, so if I am doing cardio at the gym. I sing through our catalogue to get the lung capacity up there. Annoying the hell out of everyone else around me at the gym hahaha. No background noise at all, just me hahaha and while we’re on tour. I have certain tricks that keep me from losing my voice on tour.

Jenna: I love the Album! I was sad that it didn’t get more airplay in the states, so whenever they play it live or I hear it I’m like YES!!

What I loved about the album, was that it really showed the diversity in Axl’s influences and his own music. He’s such a great songwriter, a great composer, and a vocalist his talent goes so deep. I can nerd out on his ability, like how the hell did he do that! I watch every move and study everything he does…I can only try to do something that cool.

Metal-Roos: It’s great to see so many strong female musicians gaining the spotlight. We recently had the Iron Maidens over here, who you have done shows with. Do you think there is a reason why these types of acts are gaining momentum now?

Jenna: Well, the one thing I can say, is that there is a big women empowerment movement going on. And that’s cool but women have been rockers and have been in the background for so long. It just wasn’t the right environment for women to be taken seriously. Now that we have a younger generation; we had people like Lita Ford and Pat Benatar leading up to people like Courtney Love, strong predominant rock n roll women who didn’t give a #$%@ about what was being said or doing what they told and it inspired a whole generation of women to really push boundaries. So, I think that’s why more-so now. There are more women in the music industry just in general, but especially rock that are taking over.  People like Halestorm and The Pretty Reckless are on the radio now and are killing it and it’s about time!

Metal-Roos: LA used to be seen as the epicentre for hard rock…Being a veteran of the music scene in LA, both in an original band “Jenna Syde and the Watchers” and Paradise Kitty, can you describe how the hard rock scene changed in your eyes? Is there still a strong following for this music?

Jenna: Well, I grew up basically on the sunset strip playing the Whiskey a Go-Go when I was 15. Of course it’s a different scene now with social media people can log on and watch shows for free. It’s a whole different setup…those of us that come out here come out here to LA for a reason. It’s either to make music, or be a movie star; it’s the entertainment capital of the world. You still walk down the Sunset Strip, it’s still 1985 the home of Rock n Roll, with shows every night. It’s the home of entertainment and I don’t think it’s gonna change anytime soon.

Metal-Roos: Is there a difference you can describe when performing with your original band as opposed to Paradise Kitty?

Jenna: Well you know, I do jump into different characters when I am performing. Myself I’m a theatrical person, did a lot of theatre growing up. I switch mind-frames to whatever the song is written about. So, with Guns and Roses, you will see me act out what Axl says on stage, and I do his moves. But Its still me, I song his songs note for note, but in my own way, I do his slither but with my female curves I can rock it my way…

Metal-Roos: Sounds killer! Well, Thanks again for taking the time to speak to me today…is there any more you would like to say to the fans over here?

Jenna: Just that I can’t wait to come to Oz and rock out with you guys!! 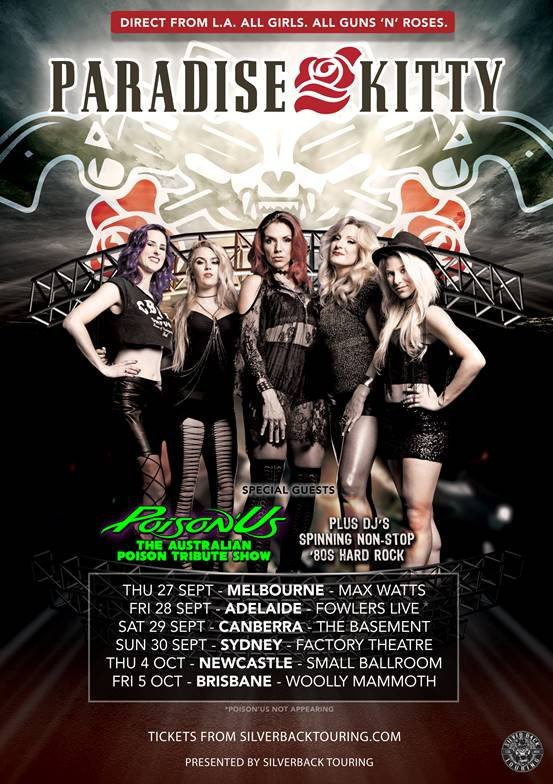 INTERVIEW: Slash on signing to Gibson Records for new album

A decade and four albums into their career, the new album 4 marks the first new music from the group in four years. A vibrant rock album fueled by memorable guitar hooks and compelling melodies, […]

What do you get when five bad ass babes, born and bred on “Appetite for Destruction” come together? You get, PARADISE KITTY, one of the world’s leading tributes to the mighty Guns N’ Roses. With serious metal honed chops […]

Slash Ft. Myles Kennedy & The Conspirators have released new song Call Off The Dogs, from their upcoming album titled 4, which is due out February 11, 2022, on Gibson Records, in partnership with Sony Music Australia. The […]