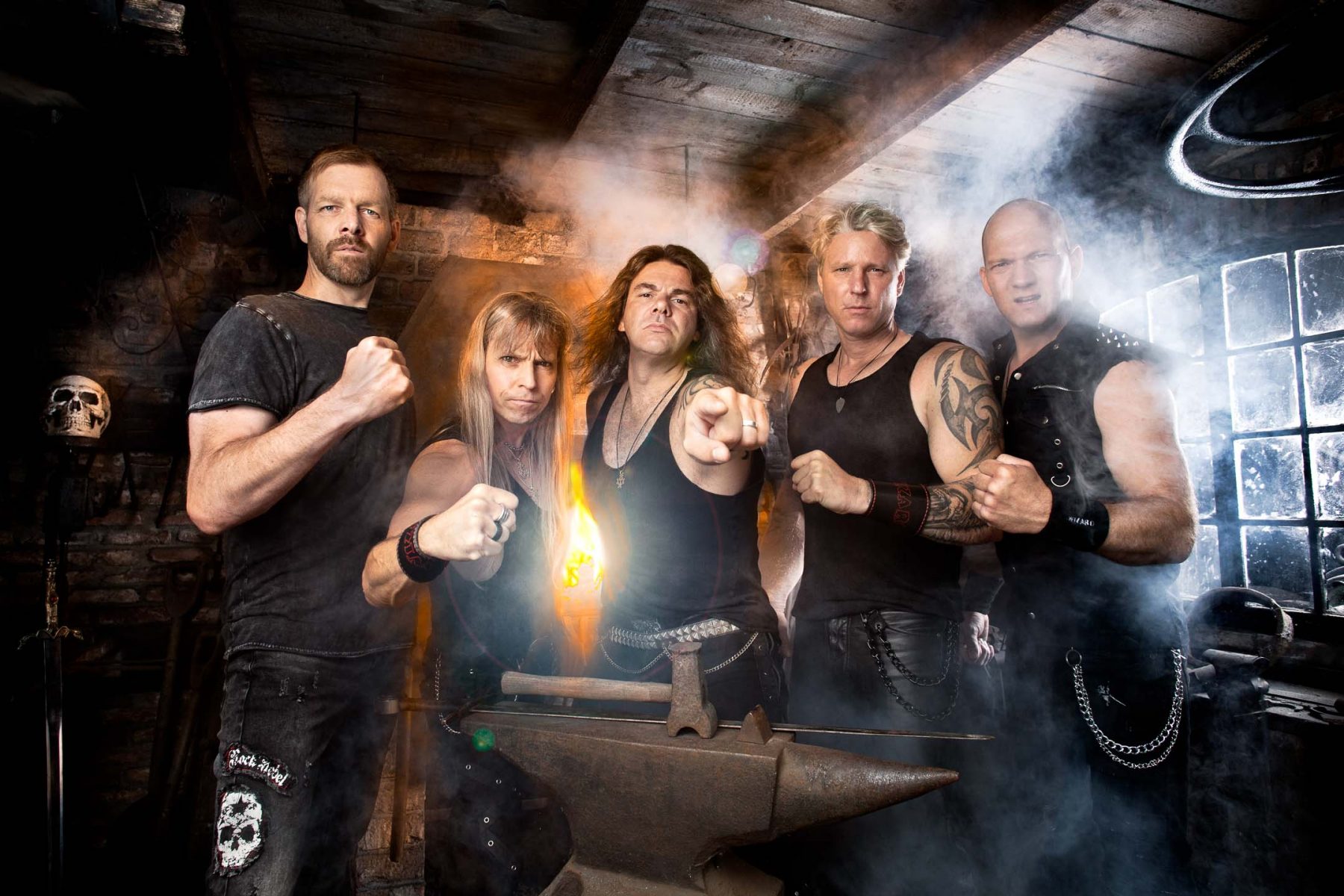 This is an interview we held with the German Power Metal band Wizard, especially for our radio show Rompiendo el Sonido, Sven D’Anna is their lead singer, and nowadays he’s also the lead singer of the Argentinian Feanor. During this exchange, we had Sven (lead singer) and Snoppi (drummer) from Wizard.

Metal-Roos: Hi Sven, Snoppi, people in Buenos Aires are always expecting news from you guys. The band is celebrating their 30th anniversary, unfortunately, under pandemic circumstances…you have a new album out now, how do you feel about it?

Sven: We are very proud that we live and can celebrate this event. Especially because we are together with the same guys nearly. We look back to a very successful career I should time. A lot of time, concerts and heavy metal. It´s a good feeling. The only thing is not that good is that we are so old now.

Metal-Roos: Can you please tell us the difference between the new album Metal in my Head and the former ones? What new things you have for them?

Snoppi: Another thing is that Donald Rowland a long time member and guitar player left the band. And Michael Maas was now in charge of creating solos, and all the guitars, and that’s how it was 20 or 30 years ago. He has a very special feeling in his guitar solos. I think you can hear it. It’s a special feeling and brings it back to our roots.

Metal-Roos: How has Tommy Hartung, your new guitarist integrated to the band? What’s your feeling about his performance?

Sven: The thing is that Tommy Hartung is a long time friend from us, it´s not a member we found on the streets (laughs). It’s good to find a guitarist that also is a friend because the band is also a big family. We don´t need any members we don´t know. The work between Michael and Maasi was very good.

Snoppi: We also have to say that Tommy entered the band at the beginning of 2020, and it was also the beginning of Corona Time, for this, we didn´t have the chance to play live with him, only some rehearsals and then we went to the studio. We didn´t have too many sessions playing together, but we worked a lot and the relationship is very good, and we hope that we can all playback live on the stages again, hopefully, this 2021.

Metal-Roos: Almost all of the band member is there from the very beginning…How do you perceive the change in the audience today?

Sven: You can´t say that very specifically. Last year we didn´t play live. And we don´t have much relation to our fans now, except social media. Some people were upset that Donald left the band, but this was for personal reasons. The things go forward and we´re looking forward to everything, and we have fun. We celebrate together, we rock together, we are heavy metal together. And we also very productive.

Metal-Roos: Tell us a bit about the ten tracks of the album, and why did you decide to put on a Feanor cover?

Sven: This is a mistake, it´s not a cover of Feanor. About a year ago,  a long time friend passed away, Martjo Brongers, and I wanted to do something for him and for me, to celebrate his life. In our band, we have guitar players and drummers, but no one can play the piano, so I asked Gustavo Acosta from Feanor to play the piano for me, to send me some parts. So he did. Gustavo and I wrote this song together. And also with the Wizard guys were involved in this production.

It´s difficult to choose a song or the best song. This album has a special feeling for me and I cannot describe it. Some songs were created by my in this cellar, during the pandemic, with a nice bottle of Jacky. I remember the time when we went on tour years ago, and the friends to party. I could not deliver the power live in the concerts as before, so I had to give this power to this album. I realize it’s a special feeling when you hear it. I love this album. Every fucking song has something great in it.

Snoppi: One thing that’s very important is that some people says the texts are very cheesy. But if you drink a little bit of alcohol with it, and you celebrate it with a party. You will see that you can´t stop listening to this album, at any time. It´s unbelievable. You will enjoy it. You can shout the chorus of every song, along with your friends, raise your fists, your glass, have fun. Each song has that feeling. That’s why is so difficult to choose one. For me, my favourite songs are Victory and We Fight. But the other songs are also very very great.

Sven: I think we are not a band to write about political affairs. We want to make and to feel the metal party. Sort of feeling the crowd and staying together with all of the fans around the world, going to festivals, this is the kind of feeling in this album. Every metalhead will get this feeling from the album.

We have had enough problems, we don´t want to see them in our lyrics.

Snoppi: Maybe for other band is good, but we like it our own way.

Metal-Roos: Tell us a bit about premiering the album. What is your thought about live streaming?

Snoppi: It´s very difficult to make a party with a camera.

Metal-Roos: Is there any possibility of performing in one of the festivals in the north of Europe, because some have been announced for the summer…

Sven: In Germany, we are in quarantine. Our tour is planned for Germany, Sweden, Austria and Denmark for October. There are about 15 gigs, and we still do not know if we will be able to perform. That remains to be seen because things in Germany are going pretty slow on the issue of the pandemic.

Sven: So far we do not have another video planned, it is likely that we will make another in May, we still do not know. As I told you about my friend who passed away, the Dutch Martjo, his birthday was in May, and we will probably make a special video of the song Whirlewolf, but it is still just an idea. We’ll see what happens.

Metal-Roos: Tell us a bit about the art of this album, which I understand was created by Jens Reinhold…

Sven:  I have a crazy neighbour whose name is Massel, he is a tattoo artist, about two years ago I asked him for a special design of mine, what he gave me, it is not exactly as on the album cover, but it comes from that idea. The thing is, I never got the tattoo. I had the design drawing in my pocket and when we were all here together thinking about the cover art, I suddenly remembered the design my neighbour had made. That’s the story of this cover.

Snoppi: At the beginning, we also had other ideas and we took them to Jens Reinhold, but nothing did not satisfy. So we discarded the first ideas. For example, there was a skull with a sword running through it, you know the idea of metal in your head, but the idea did not quite developed as such. Then Sven pulled that drawing up his sleeve (laughs), so it ended up in this art, which I think is very good and is what we wanted to convey with art. Anyone who looks at this cover will understand what this album is about.

Metal-Roos: Sven, since you’ve already been in Argentina. Is there a possibility of coming to this land with a Wizard tour?

Sven:  I hope soon. I’ve already been to Buenos Aires twice, the last time I think it was in 2018 with David Shankle. It was impressive, the audience is fabulous. I love this country and I would like my Wizard friends to also get to know Argentina, we have to.

Snoppi:  Of course, we want to play there and also meet Gustavo and the Feanors, as well as other people from the scene. Sven has told me a lot and it would be great to be able to play there.

Metal-Roos: Do you have a plausible offer so far?

Sven: For now there is no precise plan due to this pandemic and it is not possible to make plans. I hope it will be possible in 2022.

Snoppi: We had a specific offer to do a tour in South America, unfortunately, we had to cancel at the last minute due to personal problems of some members of the band, if that had not happened we would have already had our debut in Argentina. I hope we get this opportunity again.

Metal-Roos: Do you want to add anything else?

Sven: Thanks for your time. Is this on the radio?

Snoppi: We hope they spread the word about Wizard and that we can go visit them, that people meet and sing our songs, that we can celebrate. May everything be prepared for that great event.

The guys cheered and celebrated our encounter with a nice beer since the weather was getting warmer. The album METAL IN MY HEAD is out since February 19, 2021, available via European label  Massacre Records