Thrashing from the depths from the hot Australian wasteland rises this iconic inferno with an uplifting brutal blend of Heavy Metal played with furious veracity and an uncompromising attack in the Australian Heavy Metal scene.

KILLRAZER with their latest assault  THE BURIAL BEGINS With 10 outstanding smashing tracks featuring guest RIPPER OWENS alongside an awesome cover track. KILLRAZER features members from (DARK ORDER, GRUNGEON, DEVINE ELECTRIC, etc..) This is an album that will blow your face apart with its heavy intensity. The Album will be unleashed on November 12th via Battlegod Productions.

KILLRAZER has also been a major Australian support band for bands in the likes of Malevolent Creation, Dismember, Children Of Bodom, Vader, Sodom, Destruction. Also, they were the touring band for Paul Dianno and Tim Ripper Owens. 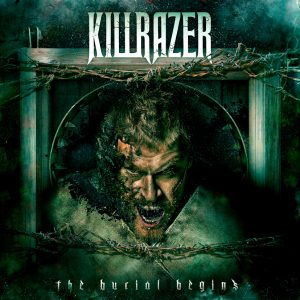