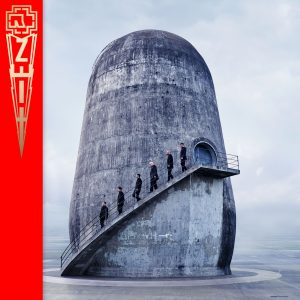 Bright is the flame that burns the quickest, but never so quick a flame as to outcompete the juggernauts of spectacular pyrotechnic live shows, Rammstein. They are back on 29 April with their eighth album, “Zeit” following on from their record without a name “Rammstein” in 2019.

Recorded in La Fabrique Studios in an idyllic part of Saint-Rémy-de-Provence, France the album came about because they had time on their hands due to a worldwide crisis at the time. Instead of touring on the back of their previous album they just got to writing as they had little else to do. With time they had amassed enough material to fill an album recorded under the watchful eye of Olsen Involtini, a Berlin-based producer, who has worked with them before. Their previous album was recorded in the same studios whose attendance includes a list of others like the Dead Daises who recorded here, and  Universal music takes care of the launching the album.

The album cover is rather an interesting one, even though the overall appearance seems rather understated. The band trundle single file down a staircase from a building called “Trudelturm” located in Aerodynamic Park in Adlershof, Berlin. It was built in the 1930s and used for aerial research during that time. The picture has been edited for more effectiveness as it usually stands in front of a few buildings surrounded by grass. The photo was taken by Bryan Adams, the Canadian rock legend, who has been developing his talents as a photographer having shot photos of Pink, Mick Jagger, Billy Idol, and many others.

If you don’t speak German, that is generally not a problem with listening to Rammstein as they have this visceral feeling within their music and melody that keep you riveted. They probably have their words sung back to them phonetically at their shows by the majority of the people. From the start of this album, it feels that this aspect is lacking. Lyrically rich with a stronger focus on the emotion and meaning rather than the riffs that accompany them, they can lack the song style of old.

“Zeit” seems to reflect a desire for keeping things as they are, but time always has to move on and things will change losing that moment forever. It has a slow, melancholy feel about it, as if an old man is talking to a young person and giving advice learned from many mistakes.

Never shying from touchy subjects or expressing their views on modern society, “Zick Zack” is a piss-take at the disturbing phenomenon of body modification. To look “better” through plastic surgery and Botox ultimately ends in us cheating ourselves and making things worse, but it has become a societal norm that some take to the extreme. The music video to accompany is disturbingly comical and highly illustrative of this point. More of this is expressed later in “Dicke Titten” (Big Tits) where a man craves large breasts in his partner and will pay handsomely to get them, portraying him as shallow and greedy.

I always end up reaching for the glow sticks and Red Bull when I hear the intro to “Giftig” with its intoxicating warehouse techno party intro before diving into the heavy riff with triplets. This is the start of the Rammstein of old. There are some familiarities to its song structure that is something that occurs occasionally throughout the album, even if perhaps the tunings are different. “Angst” carries a “Keine Lust” style riff that is rather familiar. “Zick Zack” has a similar “Los” sound to it.

When we hit “OK” we now have come to something of the previous Rammstein with their characteristic riff style and hard rock. It is good and is refreshing after the intensity of the album before it. Perhaps unintentionally or as a tribute but in the last section of the song the exact tone and chord of Rage Against the Machine can be heard. Other than that the album sounds just like Rammstein with their tone and Till Lindemann’s booming voice.

“Meine Tranen” has a soothing Breaking Benjamin-style intro with the delayed clean sound that’s sprinkled with fantasy, while “Angst” is filled with anguished vocals that push Til to a place that puts you in a state where you feel like you are living through his pain. It is powerful.

“Dicke Titten” starts with a comical ditty (I could not tell if this was used from something else or not) interspersed with crunching guitar-like lightning emanating from storm clouds before the hail storm of the Rammstein guitar army. Vocals are interestingly distorted and stratospheric in the chorus. The main riff is powerful but a little uneventful, just raw power.

“Lugen” and “Adieu” come at the end of the album and both have a similarly somber entrance into the song and their cadence is quite similar to having them back to back finishes out the parabolic flow of the album.

Certain songs contain some familiar sounds or lyrics that make us reminiscent of past songs a little too much. You mistake the tone of the album and the voice as they are all characteristic of them. Production went well and they have achieved sticking to what they do best.

This is an album that will divide. They are bands that have the strength and desire to want to go on but just relied on familiarity too much with no one song standing to be something that will stand from the rest. Certainly, their music videos are always great to watch as they put heaps of effort into making their works of art than mere adverts for their albums. This is also a review from someone not fluent in German, which might influence the outcome out as you can perhaps understand the rather topical album better and not rely on the music as much.