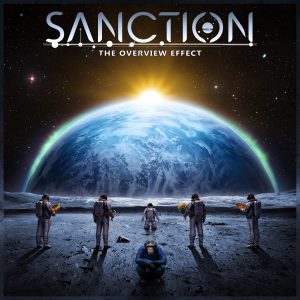 The Overview Effect is the debut album by progressive metal band Sanction. Hailing from Sydney Australia, Sanction is a three-piece comprised of Douglas Skene on vocals, Brendan Berkeley on drums, and Shane Leadbeater impressively lending his hand (and throat) to guitars, bass, sequencing, percussion, and backing vocals. The album was released in April of 2021.

The first thing that struck me about this album was how quickly Sanction get down to business. As a progressive metal fan, I was fully expecting to be eased into the journey beginning with a gentle meander so common in modern metal. No, I was thrown straight into the heavy stuff. The assumption is that you’re already well warmed up and are ready for an assault. The opening track, Monolith The Ebon Form, while only a little over 2 minutes in length, is unrelenting and sets the tone for the remainder of the album.

Winding through the album are themes of space, the origins of the universe, and that sense that we’re all just a tiny spec in the grand cosmos. The theme is pulled off well, though at times I felt the voice-overs were a little overdone (the snip of physicist Brian Cox was especially long).

Sanction is a super talented band, experimenting with a number of styles and sounds. At times guitaring that reminded me of Gojira, the vocals of Randy Blythe, and flamenco guitar is thrown in. Noticeably there are no clean vocals to be found, though Douglas does switch from growls to screeches throughout the album.

From Whence We Came is the stand-out track that takes the listener on a winding journey. The two-part Mote of Dust also works well as a continued theme. This felt well done with a genuine connection between the two songs beyond just the name.

The Overview Effect is an outstanding first attempt for Sanction and is one they should be especially proud of. It is laden with heavy riffs, thumping vocals, and experimental musical direction. I felt like I’d been taken on a journey and really enjoyed the experience. I expect big things from this band and can’t wait to see where they take it next.