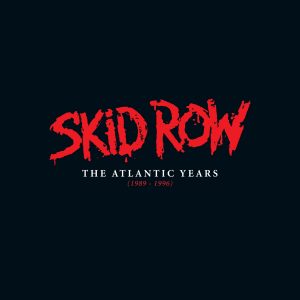 Skid Row is a hard rock/heavy metal band from the USA formed in 1986 by bassist Rachel Bolan and guitarist Dave Sabo. With the addition of second guitarist Scotti Hill, drummer Rob Affuso, and (new) lead singer Sebastian Bach, the band released their self-titled debut album in 1989. Sophomore album ‘Slave To The Grind’ followed two years later in 1991, with the band’s third album ‘Subhuman Race’ a 1995 release. Internal disagreements led to Sebastian Bach leaving the band in 1996 to be replaced by Johnny Solinger – the band releasing two albums, ‘Thick skin’ (2003) and ‘Revolutions Per Minute’ (2006) with Solinger as the band lead singer. In 2015, former DragonForce singer ZP Theart replaced Solinger, with the band planning on releasing new material at some point in 2022…

…but before then, a five-CD box set ‘The Atlantic Years 1989 – 1996’ has just been released, covering the band’s early career, and is a must-have for all Bach era Skid Row fans. Containing the band’s first five releases, the box set chronicles the band’s emphatic rise to the top of the global metal and rock scene and marks the first time that all these releases will be available in one limited edition collection.

The eighties – the decade that defined heavy metal and hard rock, with pioneering bands creating the style and sound of metal and rock that we know and love today, including many of its subgenres. Sub-genres such as thrash, glam, sleaze, and power metal. One band that made a huge impact at the tail end of the eighties, were sleaze metallers Skid Row. The band’s self-titled debut album of 1989 spawned one of Skid Row‘s greatest anthems ‘Youth Gone Wild’, along with the power ballads ’18 And Life’ and ‘I Remember You’. The bands second album ‘Slave To The Grind’, released in 1991, was heavier and grittier than their debut, with ‘Monkey Business’, ‘Wasted Time’, ‘In A Darkened Room’, and the title song standout moments from what has become a quintessential album in the history of Skid Row, and metal and rock!

1992 saw the release of ‘B-Side Ourselves’, a collection of five covers of songs of bands that were Skid Row‘s influence – bands such as The Ramones, Kiss, Judas Priest, Rush, and the Jimi Hendrix Experience. In 1995, ‘Subhuman Race’ saw the band move in a different direction – heavier and meaner, with a touch of (the newly emerging style of music) grunge. With songs such as ‘My Enemy’, ‘Breakin’ Down’, ‘Into Another’, and the blistering title song, Skid Row seemed to be moving away from their power ballad-laden first two albums. The band subsequently released the six-song live E.P. ‘Subhuman Beings On Tour’, recorded on the Subhuman Race tour, featuring guest vocalist Rob Halford (Judas Priest) on a scorching cover of the ‘Priest classic ‘Delivering The Goods’.

So what are you waiting for? Go and get your copy of Skid Row ‘The Atlantic Years 1989 – 1996’ – over three hours of classic metal and rock from one of the greatest bands of all time.

Overall, an incredible and quintessential collection of hard rock and heavy metal from one of the genre’s finest bands – Skid Row.

Multi-platinum selling band SKID ROW will embark on a full Australian tour this October whilst also hitting Auckland New Zealand. It will be the first time Australian fans get to see former Dragonforce singer ZP […]