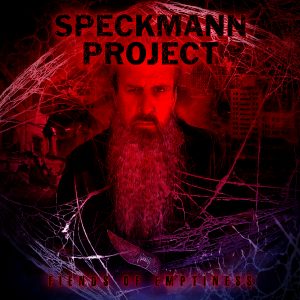 Speckmann Project’s latest release, “Fiends of Emptiness”, is a trip down memory lane to the beginnings of one of metal’s most prolific genres: death metal. And it sounds as authentic as if it were recorded I Morrisound Studios back in the late 80s.

Very reminiscent of the era where the boundary between death and thrash metal was still unclear, this record takes the best of that era, and pays tribute to material such as Possessed’s “7 churches”, as well as Cannibal Corpse’s first demos, without omitting punky elements that make you think of Obituary’s greasy repetitive riffs, and groovy stomping chugs.

And since all extreme metal was still in the same pot back in those times, you can even smell the fragrances of Tom Warrior and his many projects’ influence, mainly Hellhammer and Celtic Frost.

The production is also well rooted within the standards of that time, which makes the record a perfect revival album, that makes you nostalgic for a time when we were on the brink of discovering what has become the most brutal, face-melting music genre of all times: death metal.