It’s been 30 years since Brazil’s much loved metal gods Sepultura graced us and took over the world with their South American thrash attack. Born out of the urban jungle of Sao Paulo, they have consistently brought us tribal styled metal heavily influenced by their native lands.

In a recent interview guitarist Andreas Kisser said the album was influenced by 1927 film by Fritz Lang film called "Metropolis", where robots rule and the world is controlled by technology, also being touched on this this album were subject matter like human suffering, natural disasters and the struggle of man. Sepultura have always been down to earth with their lyrical content following their hearts and in the support of the struggling, under privileged and those who are unable to have a voice, and this album continues on that track, understanding where they come from means a lot to the people of a struggling country like Brazil and Sepultura are their voice.

This new release "The Mediator Between Head and Hands Must Be The Heart" is an album that is pure Sepultura from the first song "Trauma Of War" a high tempo old school Thrash attack that sounds like Sepultura of old and it continues throughout the whole album giving us head pumping riffs, tribal drum pieces and the ears don’t get a rest for the whole 48 minutes, a particular highlight for me, which after a couple of slower tracks "The Age Of The Atheist " and "Grief", the track "Obsessed" came out of left field with brutal force, Derek Green gave his throat a fair pounding and the rhythm is just awesome, circle pit material and a perfect track for that toxic waltz with your favourite lady!

Overall this is exactly what you would expect from the Brazilian masters, it’s Sepultura as raw and stripped down as you could get, there is a little production pieces added in there for atmosphere, and these parts suite the songs, almost like a trailer before the real action begins, but it definitely doesn’t take away from what the band is trying to achieve both lyrically and musically, and there message gets across as only they can do. It’s a harder style that what we’ve had from their last releases and it won’t disappoint any fans of Sepultura out there.

Andreas, Paulo, Derrick and young drum maestro Eloy have pulled off one of the Thrash albums of the year with "The Mediator Between the Head and the Hands Must Be the Heart", and my fingers are getting sore from typing the album title again so I think I might just push number one again on this album and enjoy this fine album from these Brazilian gods, TCHAU. 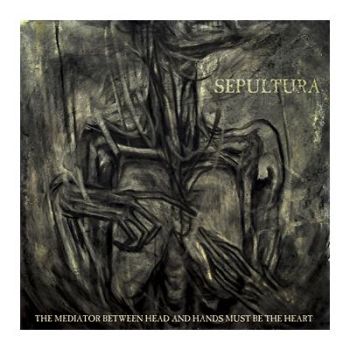